The operation has resulted in 15 arrests, 10 house searches – two of them in Murcia – and the seizure of more than 30,000 euros as well as various weapons, narcotics and jewellery. 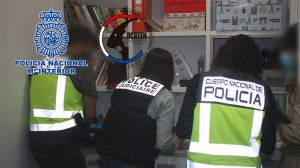 The National Police, in a joint operation carried out with the French police, has dismantled a criminal organisation, made up of a family clan, which was dedicated to the sexual exploitation of women of Paraguayan origin on French territory and has culminated in the arrest of 15 people.

Operation “Taranis” has resulted in 15 arrests, 11 in France, two in Murcia, one in Madrid and one in Albacete. The agents have also searched ten homes, seven in different French towns, two in Murcia and one in Madrid. They seized more than 30,000 euros in cash, several weapons, including a detonating pistol, narcotic substances, computer equipment, more than 30 mobile phones, jewellery, a top-of-the-range brand watch and various documents related to the investigation.

The organisation was made up of a family clan, although it also received collaboration from third parties, established in Paraguay, Spain and France. It was dedicated to the recruitment of women in their place of origin, mostly from Paraguay, and from Spain they managed, either through the Internet or telephone calls, the requests of clients for sexual services related to prostitution that were advertised in France, as if it were a call-centre.

The criminal branch based in Spain was also in charge of sending money from the exploitation to Paraguay, sending more than 200,000 euros between 2016 and 2020. In addition, they carried out the necessary administrative procedures to obtain identity documents for the victims, with the aim of prolonging their stay in France to work as prostitutes.

Those arrested in Spain had specific functions, such as renting some of the houses located in France where the sexual exploitation took place. They were also in charge of transporting their victims from Spain to France for prostitution.

In addition to the arrests made in Europe, four other arrests have been made in Paraguay, where invoices, money receipts, electronic devices and several vehicles have been seized.

The National Police has reminded the public that it has a telephone line 900 10 50 90 and an e-mail address trata@policia.es to facilitate citizen collaboration and anonymous and confidential reporting of this type of crime, which is not reflected in the telephone bill.