All are men aged between 12 and 52 years who have been treated on site and have not been transferred to hospital. 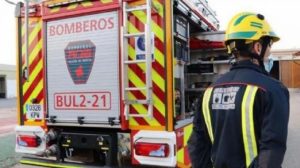 Five men, aged between 12 and 52 years, have been poisoned this Sunday by smoke inhalation after a fire in a house in a building in the polygon Santa Ana de Cartagena, reported sources from the Emergency Coordination Centre.

The events occurred around 17:10 hours, when the 112 telephone has received several calls alerting of the declaration of a fire in a building located in a six-storey building on Paseo Florencia, in the polygon of Santa Ana.

Local police patrols and firefighters from Cartagena were sent to the scene to extinguish the fire, while medical staff from several ambulances attended to five men, aged 12, 34, 42, 48 and 52, who did not need to be taken to a medical centre.