Public Health carries out 28 inspections in nightlife areas, hotels, restaurants and nightlife and sanctions 24 of them. 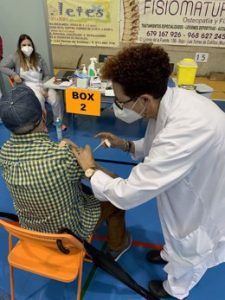 The average incidence rate of Covid in the Region of Murcia has increased by 90% per week and the Technical Monitoring Committee in the Region has announced, among other measures, to continue with population screening in those areas where a substantial increase in the number of cases has been detected, strengthening tracing efforts to curb contagion.

The Committee has also agreed to extend the work of the Public Health inspectorate to ensure compliance with the rules. And, given the importance of getting vaccinated, it has agreed to set up mobile vaccination points during the month of December with the 061 unit, starting in the urban centres of Murcia, Cartagena and Lorca, in busy commercial areas in the run-up to the upcoming dates.

Apart from these mobile points, details of which will be announced soon when they have been finalised, the Regional Ministry has also recalled that the fixed vaccination points are being maintained.

“We are seeing an increase in the measured incidence rate throughout the country and in all the communities,” according to the Regional Minister of Health, Juan José Pedreño, at the press conference following the Committee meeting.

Specifically, the Region registers a rate of 135 cases per 100,000 inhabitants accumulated in the last 14 days; and 89 cases in the last 7 days; which represents an average weekly increase of 90%.

PUBLIC HEALTH INSPECTIONS
As agreed by the Covid Committee last week to monitor compliance with the measures to combat the pandemic, this weekend a special Public Health inspection plan has been put in place for late-night areas, hotels, restaurants and nightlife. A total of nine inspectors have been carrying out inspections since Friday afternoon and throughout the weekend.

In total, 28 inspections have been carried out and reports have been issued for non-compliance with certain restrictions in 24 of them.

In view of the increase in the number of cases, Pedreño asked for the collaboration of the Government Delegation, the agents of the State Security Forces and Corps, as well as the local police officers of the 45 municipalities to reinforce their vigilance”.

INCREASE IN INFECTIONS FOCUSED ON CHILDREN
He stressed that the increase in the number of infections is mainly affecting children under 12 years of age, who have not been vaccinated. Specifically, they are being recorded in social and recreational activities outside educational centres, such as birthdays, parties or sporting and cultural activities, which are at the origin of the transmission of the virus in educational classrooms and families.

According to the latest weekly epidemiological report, the social environment, nightlife, informal and family gatherings are at the origin of 86% of the 730 cases detected in the last two weeks.