The importance of the Roma community in the municipality of Vera, which represents more than 20% of its total population, is well known, and in proportion to its number of inhabitants, it is one of the towns with the largest Roma population in Spain. In this sense, it is also worth remembering that nearly 500,000 Roma people live in Andalusia, being the Autonomous Community with the largest Roma population in the whole country. This social reality means that the Veratense Town Council celebrates 22 November, Andalusian Gypsy Day, in accordance with the Institutional Declaration made by the Andalusian Parliament in 1996, which recognised the contributions made by the Andalusian Gypsies in the construction of the Andalusian cultural heritage since the arrival of the Gypsy people in 1462. To celebrate this day and to learn about the history of the Andalusian Gypsies and more specifically that of the Gypsies of Vera, the local Town Hall has organised a full programme of activities which began yesterday, Sunday, and will continue today, Monday 22 November, the Day of the Andalusian Gypsy.

The young cantaora from Jerez, proclaimed by various specialised media as “the princess of flamenco singing”, gave an apotheosis performance that captivated the audience that packed the Auditorio Ciudad de Vera, and brought them to their feet on numerous occasions with cheers and loud applause. Before the performance began, Rosa Fernández Cortés, a gypsy from Vera, sang a capella the International Gypsy Hymn “Gelem Gelem”, which moved the audience who gave Rosa a standing ovation. According to José María Fernández Cortés, Councillor for Intercultural Mediation of Vera Town Council, “for us this is a date to vindicate and recognise all the contributions that the gypsies of Vera have made to our municipality and to the enhancement of Andalusian culture”. 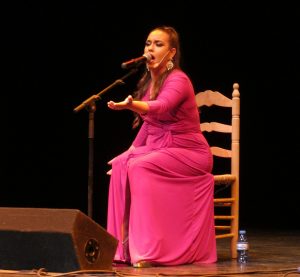 The Jerez-born cantaora “María Terremoto” triumphed last night in the performance that kicked off the events commemorating the Day of the Andalusian Gypsies in Vera.