The course is part of the set of training actions that will be developed in 2021 and aims to provide the necessary skills for intervention with ladder vehicles. 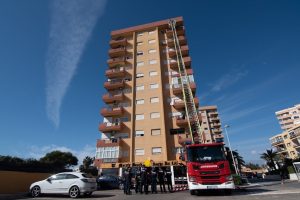 24 members of the Poniente Fire Brigade have completed the 24 hours of theoretical and practical training that the course consisted of. The theoretical sessions were held at the Roquetas de Mar Fire Station, and the practical sessions were carried out in various buildings and tourist sites in the Roquetas de Mar urbanisation, with a series of spectacular intervention drills and attack and landing manoeuvres on the façade.
Throughout the course, key concepts of geometry and vehicle positioning rules in different scenarios and situations were explained.
The president of the Consorcio de Bomberos del Poniente and councillor of Roquetas de Mar Town Council, José Juan Rodríguez, who personally supervised the mock intervention, explained that “the training consisted of learning in a practical way to use this vehicle efficiently and as closely as possible to reality, to deal with possible situations that firefighters may encounter when they have to go to an intervention at height in which it may be difficult to access if they do not have adequate preparation and know well the limitations and possibilities of the means at their disposal. This vehicle is not only used in case of fire, but also in other situations, such as renovation of façades, on windy days, forced entry into houses, to help medical personnel when they cannot evacuate people by stairs or to attach a stretcher for medical rescues”. 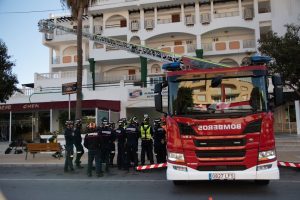 One of the firefighters in charge of giving the course, Jesús Hernando, instructor of the Course on Firefighter Interventions with Automatic Ladders, pointed out that “firefighters encounter numerous obstacles when carrying out their work with the high vehicle because it has a limited range, especially if we add the distances that are produced by urban planning and gardens, narrow streets or vehicles that are parked in them”. 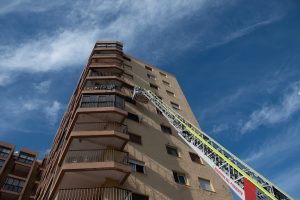 Since the end of 2020, Roquetas de Mar has had a state-of-the-art AEA1 fire engine, designed for fire fighting and work at great heights.
It is a vehicle with a Magirus multidirectional articulated ladder on a Scania chassis, designed for fire fighting and work at great heights, which was incorporated into the Roquetas de Mar Fire Station last year with an investment of 900,000 €.
Thanks to this vehicle, fire extinguishing, façade restoration and rescue work in areas with special difficulties, such as industrial complexes, tourist facilities and high-rise buildings, can be carried out more quickly. For this purpose, the vehicle has, among other features, the capacity to launch its ladder up to a height of more than thirty-four metres, as well as to expel up to three thousand litres of water per minute.