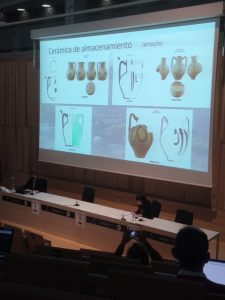 The 13th AIECM3 Conference on Medieval and Modern Mediterranean Ceramics was held in Granada, organised by the University of Granada, with the participation of archaeologists from the excavations at Mojácar la Vieja, who presented their findings to date.
In the paper “Characterisation of Almohad and Nasrid Production in the Levante Almeriense”, the Mojácar la Vieja site and the discoveries made in the three excavation campaigns carried out served as an example and a motive for analysis for the archaeologists from all over the world attending the conference.
The presentation was given by José María Martín Civantos, Director of the excavations and the Biocultural Archaeology Laboratory of the University of Granada, as well as Cristina Martinez, Noelia Aguado, Julio Román, Pablo Romero, Jorge Rouco, José Abellán, Blas Ramos, José María Moreno and José María Martin Civantos, all members of the laboratory and archaeological specialists in different fields who have actively participated in the work at Mojacar la Vieja.
The presentation developed many of the conclusions that were already exposed in Mojácar at the end of the third excavation campaign in September of this year, and thanks to the digitalisation and the effort made during these months, it has been possible to admire in 3D many of the important pieces found.
The AIECM3 is an international association for the study of medieval and modern ceramics in the Mediterranean. It organises its international conference every three years and also organises innovative thematic workshops. Thanks to the work of this association, new achievements and significant reflections on the history of ceramics have been made possible.
This is the first time it is held in Granada, following the line of previous congresses, as well as emphasising discussion and debate.
In its sessions, the world of archaeology is given an account of the advances made in ceramic production and technology, ceramic consumption patterns, the social significance of ceramic production and new discoveries, always within the Mediterranean area.
The inclusion of the Mojácar la Vieja site confirms the importance of this enclave and the important role it will play in the study and interpretation of the Almohad and Nasrid periods in the history of our country.