– The agents seized two kilos of hashish distributed in four packages with five tablets each.

– The detainee stopped on the shoulder of the motorway a few metres before reaching an operational checkpoint in the Almería municipality of Níjar and threw a bag with the drugs onto the side of the road. 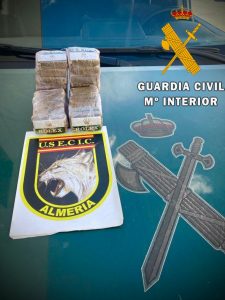 The Guardia Civil of Almería has arrested, in a recent action in the municipality of Níjar, a 50-year-old man who was carrying two kilos of hashish in his vehicle and tried to evade an operational control located on the A7 motorway in the direction of Murcia. On noticing the security device, the detainee stopped the car on the hard shoulder a few metres before, threw a bag with the drugs on the side of the road and opened the bonnet of the car to simulate a breakdown.

This action is part of the Telos plan, which aims to comprehensively combat the trafficking of hashish from North Africa by sea, land and air, thus preventing its subsequent distribution in Spain or any other European country.

The events took place at the end of the morning, in broad daylight. The agents witnessed how the perpetrator had thrown away the bag and found that the vehicle was not damaged in any way.

On examining the inside of the thrown bag, they found four packets of a brown substance, later identified as hashish, distributed in five tablets of 100 grams each. Subsequently, the vehicle was inspected and three mobile phones were found, one of them without GPS technology.

During the identification, the Guardia Civil found that the detainee had an order prohibiting him from entering the national territory, which he had already broken on other occasions, and that he also lacked a valid driving licence in Spain.

The perpetrator has been arrested for a crime against public health, in addition to breaking an order prohibiting access to the national territory. He has also been proposed for an administrative sanction for driving without a valid Spanish driving licence.

The proceedings carried out by the Guardia Civil together with the detainee and the seized drugs have been sent to the Examining Magistrate’s Court of Almeria.