– The agents observe that the van driven by the detainee is dangerously overloaded.

– Upon inspection of the vehicle, they found six large packets of marijuana ready for sale and consumption. 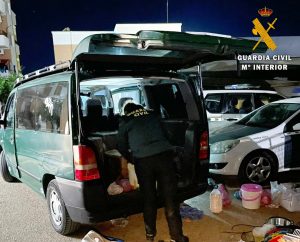 The Guardia Civil of Almeria arrested in a recent action in the municipality of Huércal Overa a person carrying eight kilograms of marijuana for a crime against public health.

This action is part of the permanent activity carried out by the Guardia Civil in the fight against drug trafficking in the area of public safety in the province of Almeria.

The officers, who are on public safety duty, observed a van travelling at kilometre 546 of the A-7 in the direction of Almería, dangerously invading the left lane on several occasions due to its overweight, with the risk of causing a traffic accident with serious consequences.

In order to avoid this, the officers escorted the vehicle to a safe place and proceeded to identify the driver, checking with the Operational Communications Centre (C.O.C. 062) that this person had a previous record for drug trafficking in actions earlier in the year.

The agents carried out an inspection of the interior of the vehicle and located, among the numerous items being transported, a first large package wrapped in plastic containing marijuana ready for sale and consumption.

The agents proceeded to arrest the driver for a crime against public health. 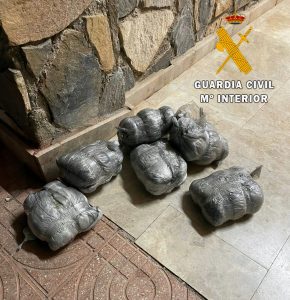 The proceedings carried out by the Guardia Civil together with the detainee and the seized drugs have been handed over to the Juzgado de Instrucción number three Huércal Overa (Almería), and the vehicle has been placed in a judicial deposit.