The cold and snow storm that is affecting a large part of the Peninsula has also made itself felt, albeit timidly, in the Region of Murcia. The first snowflakes have set in Sierra Espuña. 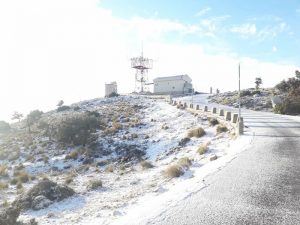 The snow has arrived in a timid form to some areas above one thousand metres with barely a centimetre of thickness, as confirmed by the State Meteorological Agency in Murcia. For now, the forecast points to very little precipitation in the form of snow on Saturday afternoon in high areas of the northwest (700-800 metres), while no precipitation is expected on Sunday.