– In the “MONTIEL” operation, more than 2 million doses of marijuana have been seized and 15 people have been arrested.

– Four intensive cannabis sativa plantations have been dismantled. The marijuana was destined for the United Kingdom, Holland, France and Belgium.

– A Vietnamese national, a victim of human trafficking for the commission of criminal acts, was released from a plantation. 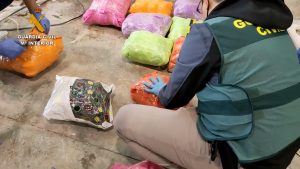 The Guardia Civil, within the framework of operation “Montiel”, has proceeded to the arrest of 15 people belonging to a criminal organisation dedicated to drug trafficking at national level. The detainees are charged with alleged offences against public health, membership of a criminal organisation, trafficking in human beings, document forgery, usurpation of civil status, money laundering and electricity fraud.

Seven searches were carried out in the operation, two of them in industrial warehouses in the province of Albacete, another two in industrial warehouses in the Valencian towns of Oliva and Corbera, another two in the Murcian towns of Torre Pacheco and Archena and one in Seville. The searches led to the seizure of 6,648 cannabis sativa plants, 47,139 grams of dried marijuana buds, 8,478 euros in banknotes, 168,000 Hungarian forints, 1,780 remninbi (Chinese currency), 7 high-end vehicles and material necessary for the operation and installation of the indoor plantations that have been dismantled.

Likewise, in one of the warehouses in the province of Albacete, a Vietnamese national, who was in deplorable hygienic and sanitary conditions, has been released in order to attend to both plantations.
The investigation began in May of last year, when the Guardia Civil became aware of the existence of a possible intensive cultivation point for cannabis sativa inside a warehouse on an industrial estate in the Albacete town of Chinchilla de Montearagón and another in the town of La Gineta.

Continuing with the investigations, the agents were able to identify the members of the organisation, while at the same time drawing up the organisation chart, detailing the degree of responsibility and tasks carried out by all of them, verifying a criminal network, dedicated to the cultivation, purchase and export of large quantities of cannabis sativa buds to European countries. 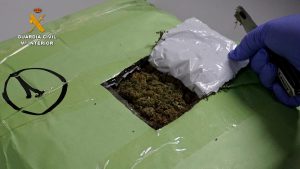 One of the cells of the organisation was dedicated to renting the industrial buildings, where the indoor plantations were later established, carrying out the necessary works and modifications inside them, such as the panelling of the rooms where the marijuana was grown, the installation of powerful refrigeration equipment. In addition, the premises were equipped with a complex electrical system that was fraudulently fed from the general supply, located outside the premises, which was accessed by digging long, deep tunnels in the ground.

These warehouses were staffed by Asian nationals, who remained in them on a permanent basis, carrying out the maintenance and security functions of the plantation.

The leaders of the organisation, in addition to supervising the plantations, gave the appropriate orders to those in charge of their control and maintenance, providing them with everything necessary for the proper development of the crops as well as the food for their maintenance, as these people practically never left the facilities where the cannabis sativa plantations were housed.

Faced with the strong demand for marijuana, the criminal organisation created another cell, which established a house in Seville as a place for packaging, distributing and shipping the drugs, and also contacted intermediaries in other provinces of the Andalusian community to purchase large quantities of cannabis sativa buds. 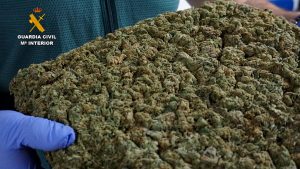 The packages of buds, vacuum-packed and protected by several outer layers to make the smell more difficult, were presented to courier companies for subsequent shipment to various European countries, using false identities and documentation, usurped from other Asian citizens.

The Guardia Civil has seized numerous shipments in parcel delivery companies in the provinces of Albacete, Valencia, Alicante, Almeria and Cordoba, containing marijuana buds perfectly packaged and hidden in clothing for shipment to European countries. 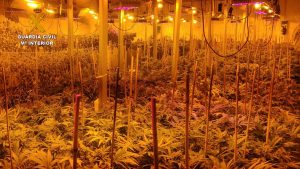 Part of this quantity of marijuana was seized in England, with most of it destined for destinations in Europe, such as the United Kingdom, Holland, Belgium and France. In addition, 310 grams of marijuana buds, self-sealing bags for distribution, 26 grams of hashish and a precision scale were seized in a grow shop located in a town in the province of Murcia and directly related to the criminal organisation under investigation. 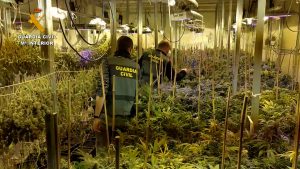 As a result of these interventions, the agents arrested three people in the Almeria town of Roquetas de Mar, when they were trying to send several packages of marijuana to different European countries via a transport company. After these initial arrests, the Guardia Civil detained the remaining members.

Fraud of electricity valued at more than 50,000 euros

Once the expert report had been drawn up by the electricity distribution company, it was estimated that the fraudulent use of electricity in the warehouses where the plantations were housed exceeded 50,000 euros.

Thanks to this intervention, the circulation of more than 2 million doses of marijuana has been prevented.

The operation was carried out by members of the Organised Crime and Anti-Drugs Team (EDOA) of the Judicial Police Unit of the Albacete Civil Guard Command.
The operation has been directed by the Juzgado de Instrucción number ONE of Albacete.