Approval in the Parliament of Andalusia of the Law of Impulse for the Sustainability of the Territory of Andalusia (LISTA), with the votes in favour of PP, Cs and VOX and the abstention of PSOE.

The Regional   Minister of Development, Infrastructure and Territorial Planning, Marifrán Carazo, thanked the support of the parliamentary groups for a law “that will be a lever of change for economic recovery and the generation of employment in our land”.

The Parliament of Andalusia has approved the Law for the Promotion of the Sustainability of the Territory of Andalusia (LISTA) with the votes in favour of PP, Cs and VOX and the abstention of PSOE. The Minister of Development, Infrastructure and Territorial Planning, Marifrán Carazo, thanked the parliamentary groups for their support for a law that will be “a lever of change for Andalusia, as it will accelerate the mechanisms for economic recovery and job creation”. 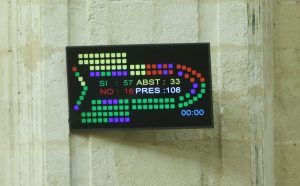 Marifrán Carazo recalled that this is the “most important law not only of this legislature, but of the last few years”. “The LISTA will make our land a more prosperous area, more respectful of the environment, as well as eliminating bureaucratic obstacles and allowing the development of projects that will provide more opportunities for the economy and employment in our municipalities,” said Marifrán Carazo after the approval in Parliament. In her speech, she thanked the support received during its preparation by professional groups, companies and town councils who pointed out the problems they were experiencing in the development of their projects within the current regulatory framework. “They pointed out to me that getting around the urban planning laws of Andalusia was a complete ordeal,” he added.

The new law proposes a new urban planning model that helps economic development and job creation in Andalusia as a whole. The LISTA offers legal certainty, avoiding the problems caused by the annulment of urban development plans by the courts, as well as eliminating the existing regulatory tangle. It will also speed up the processing of plans, reducing deadlines and bureaucracy, by extending the use of the responsible declaration and giving a new treatment to administrative silence, so that the delay or inactivity of the Administration does not paralyse their processing.

It also opens up possibilities for small municipalities and rural Andalusia. One of its most important new features is the regulation of rural land, which will allow the construction of detached single-family houses on rural land, always respecting the environment and favouring the fight against depopulation.

The LISTA opens up the possibility for local councils to draw up special plans to correct the environmental impact generated by groups of irregular buildings and to provide them with basic sanitation, water and electricity infrastructures, thereby guaranteeing minimum safety and health conditions.

The Andalusian government, aware of the importance of this regulation, has speeded up its processing, both in its administrative phase (15 months) and in parliament (three months). During its journey, it has been approved by the Advisory Council, the Andalusian Council of Local Governments and around thirty entities, professional associations and groups who signed a document supporting the new regulation.

After its approval in Parliament, the LISTA will come into force 20 days after its publication in the Official Gazette of the Andalusian Regional Government (BOJA). This means that the new legal framework for spatial and urban planning in Andalusia will be fully effective in the first days of next year. The implementing regulations, which are well advanced, will be approved within six months of the law’s approval.