– The detainee hit the victim with a stone on the head leaving him in a coma for two months.

– The aggressor fled to Barcelona after committing the crime and was located when he returned to Níjar. 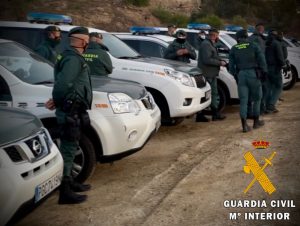 The Guardia Civil of Almeria has arrested a 23-year-old man for an alleged attempted murder after an argument with a neighbour in a shanty town in the Almeria town of Nijar. The detainee used a stone to hit the victim on the head, causing serious injuries that left him in a coma for two months.

The proceedings began on 5 May 2021 when a relative of the victim went to the Guardia Civil and informed the officers that his relative was admitted to the ICU of the Torrecárdenas Hospital in the capital in a very serious condition as a result of an assault suffered on 27 April in the shanty town of Atochares (Nijar), for which he needed emergency surgery.

The complainant stated that, after an argument with a neighbour, his relative had been hit on the head by the latter, causing him serious injuries, for which reason he was admitted to the ICU in a coma.

The information obtained led to the launch of Operation COALIN. After numerous investigations and analysis of the available data, the agents discovered that the alleged perpetrator had fled to Barcelona after committing the crime. A few days later, on 23 November, they managed to locate the individual in Níjar, where he had returned, and proceeded to arrest him.

The detainee, together with the proceedings, was placed at the disposal of the Court of Instruction no. 6 of Almeria, who ordered him to be sent to prison without bail.