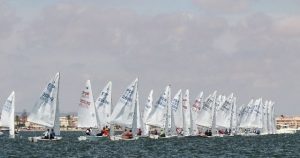 Martín Bermúdez and Ángela Pumariega and Gonzalo Calvo and Alexandre Tinoco complete the podium at the RCR de Santiago de la Ribera, on a first day marked by gusty winds of 12-14 knots.

The XLII Spanish Armada Trophy, organised by the RCR of Santiago de la Ribera and within the framework of the IX Admiral Marcial Sanchez Barcaiztegui Trophy, XVI Azor Environmental Trophy and Paco Pérez Memorial closes its first day fulfilling the script, both in the favourites for the podium and in the wind conditions, with an average of 12-14 knots on an axis that has remained between 300º and 330º.

As expected and on a complicated race course due to the gusty wind that forced the crews to work extra hard, the brothers Pablo and Martín Fresneda (CM Almería) took the lead thanks to two good results, with a second and a first.

The provisional podium places were not much better than expected with two days and four races to go. The Madrid-Asturian tandem, with Martín Bermúdez (RCN Madrid) and Ángela Pumariega (RC Astur de Regatas) occupying second place. They did well in the first, with a hard-earned and well-deserved partial victory, and badly in the second, in which they were unable to finish higher than tenth place. A result that could take its toll on the rest of the competition.

The bronze, for the moment, was also foreseen with the Valencians Gonzalo Calvo and Alexandre Tinoco (RCN Valencia). Like Bermúdez and Pumariega one right and one wrong. Their start in the Mar Menor was with a ninth place, then they have improved and that third place allows them to close the day with 12 points, 1 point behind the second and 9 behind the first.