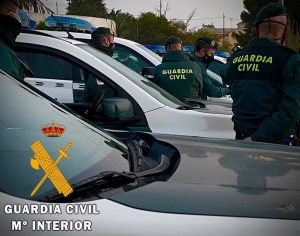 Agents of the Guardia Civil of Almeria, locate a missing minor in the town of Cuevas del Almanzora after a quick action.

The officers became aware of the disappearance of an 11 year old minor through an alert from the Operational Communications Centre (C.O.C. – 062).

An investigation and search operation was swiftly initiated, which initially led the officers to gather information from her close relatives and to monitor social networks, actions which provided the officers with valuable information.

After analysing these initial indications, the agents quickly moved to the town of Vera (Almería), as they understood that the minor could be in a specific area of the town in the company of a 21-year-old adult.

Several patrols in the area began an urgent house-to-house search until they located a source through which they received information that the minor was in a nearby farmhouse.

The diligence of the agents in each of the investigation and search actions allows them to locate the minor within a few hours, preserving her identity and securing the victim, who is taken to the Vera health centre for medical attention.

On the other hand, the agents proceed to the arrest of a 21 year old male, resident of the town of Vera for alleged sexual abuse of a minor.