Covid forces, for the second year running, to celebrate Constitution Day in the street and without the public 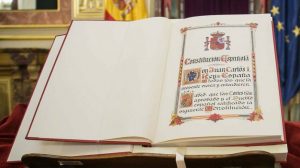 The evolution of the pandemic has forced Congress to once again celebrate the anniversary of the Constitution in the Carrera de San Jerónimo, in the vicinity of the steps of the Puerta de los Leones, where the President of the Lower House, Meritxell Batet, will give a speech today before the President of the Government and high-ranking political and institutional officials. This is the second consecutive year in which, due to health restrictions linked to the pandemic, the event will be held in the street and not in the Salon de Pasos Perdidos of the Palace of Congress.

On the steps and on both sides of the lions will also be the members of the Congress and Senate Committees and the spokespersons of the parliamentary groups of both Chambers, as well as the ministers.

The leaders of the majority opposition parties, deputies and senators, former presidents of the Government and of Congress and the Senate, and constitutional rapporteurs are other authorities who will attend the commemoration ceremony. For example, the leader of the PP, Pablo Casado, and the president of Ciudadanos, Inés Arimadas, will be present, but the presence of the nationalist and pro-independence parties is not expected, as usual.

Other high-ranking officials, such as the new president of the Court of Auditors, Enriqueta Chicano, and the new Ombudsman, Ángel Gabilondo, have been invited to the institutional event.

The State Attorney General, Dolores Delgado, is also expected to attend, as is the Mayor of Madrid, José Luis Martínez-Almeida, and, as every year, the presidents of all the autonomous communities and cities have been invited.