– The perpetrators were two men, aged 31 and 22, and had numerous previous convictions for similar offences. They are charged with four offences of robbery with violence and two of theft.

– The identification of the vehicle they used to flee after each robbery was the key to their arrest and the recovery of the stolen items.

The Guardia Civil within the framework of Operation “Barkian” has arrested two men aged 31 and 22, as alleged perpetrators of four crimes of robbery with violence and two of theft and one of damage committed between late October and early November in the Almeria town of Roquetas de Mar and has recovered the various stolen items. 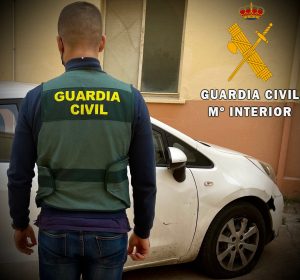 The Guardia Civil began this investigation on 29 October when the manager of a supermarket in La Mojonera reported that the cash register had been stolen and caused extensive damage to his establishment. The following day, another robbery was reported in a bar in the municipality of Roquetas de Mar.

The agents managed to get the operation underway when, a week later, they learned of several robberies with violence in the same locality. Specifically, they received reports of four robberies with violence with a similar modus operandi: two individuals chose victims who were visibly carrying valuables and, while one of them waited in the driver’s seat of a stolen vehicle, the other snatched the object with a strong jerk and both fled in the car at high speed.

The Guardia Civil carried out a number of different actions to identify the vehicle used by the perpetrators. Two days after the last robbery, the agents located the car, inside which they found two people who matched the descriptions given by the victims in their complaints. In addition, when they searched the vehicle, they found several of the stolen objects, including a Louis Vuitton handbag valued at 2,700 euros, glasses and high-value mobile phones.

Finally, after checking all the information, the agents proceeded to carry out a photographic recognition report, where the victim identified and fully recognised the perpetrators without any doubts, so that finally as a result of the investigation they proceeded to the arrest of two men aged 31 and 22, as alleged perpetrators of four crimes of robbery with violence, two crimes of theft and one of damage.

This arrest is part of the activities carried out by the Guardia Civil, during the citizen security services, carried out in the west of Almeria, to prevent and avoid the different robberies, providing a rapid response to criminal acts committed in this area.

The proceedings, together with the detainees, have been sent to the Court of First Instance and Instruction Number One of Roquetas de Mar (Almeria).