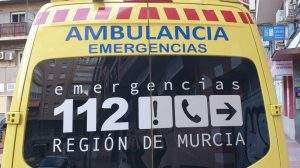 A 47-year-old man was seriously injured on Friday after being hit by a train in the Virgen de la Caridad neighbourhood in Cartagena, according to sources from the Emergency Coordination Centre.

At 8.20 a.m. 112 received a call alerting them to the accident suffered by a man on the railway track, in the Barriada Virgen de la Caridad (Las 600), who had apparently been hit by a train that was running at the time.

Police officers from the Cartagena local police were called to the scene, who alerted the health services and the 061 Emergency and Health Emergency Management Service mobilised a Mobile Emergency Unit (UME).

The medical staff attended to the man, who had serious injuries, at the scene of the incident, after which he was transferred to the Hospital General Universitario Santa Lucía.