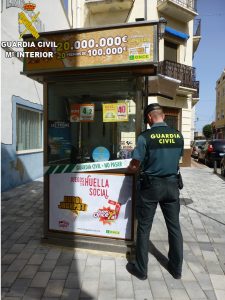 The Guardia Civil of Almeria, within the framework of operation ‘SORTITIO’, has arrested a couple made up of a 30 year old man and a 28 year old woman who stole 120 coupons and 22 books of scratch cards from the home of an ONCE vendor in the town of Adra. The perpetrators collected around 800 euros from various winning tickets in different establishments in the Poniente area of Almeria.

The investigation began following a complaint by the ONCE employee, whose home, located on the first floor, was accessed by the two detainees through a window. There, they stole a lottery worth 1,450 euros. The agents checked several lottery outlets in different municipalities where the perpetrators had collected several prizes.
As a result of these efforts, the Guardia Civil managed to identify the couple, who had tried to avoid arousing suspicion by going to different establishments to collect the coupon prizes without actually handing over all of the stolen tickets.

The two detainees have been charged with a crime of robbery with force and another of fraud and, along with the proceedings, have been placed at the disposal of the Court of First Instance and Instruction number 1 of Berja (Almeria).

Theft of a trailer

In another operation carried out independently also in the town of Adra, the Guardia Civil investigated a 35-year-old man for the theft of an agricultural trailer and its subsequent sale and purchase. The owner of the vehicle reported the theft after recognising it in the area of La Curva, in the municipality of Adra.

The agents managed to locate the trailer and recover it to return it to its owner. They then took steps to identify the person who was using it at the time, who claimed to have borrowed it. Shortly afterwards, he confessed to the investigators that he had acquired it and that he had a contract of sale.

The Guardia Civil verified that the seller appearing in the contract did not coincide with the real owner of the trailer and that the detainee had used the details of a person who was not involved in the facts as the seller in the purchase and sale documents.

The suspect, who had previous convictions for similar offences, has been handed over to the Court of First Instance and Investigation number 1 of Berja (Almeria) together with the proceedings.