Cooltural Fest was born with a vocation of continuity and this has been reaffirmed today with the presentation of the first preview of the line-up for what will be its fifth year, which aims to resume the ‘normalised’ edition of the festival, which will be on 19, 20 and 21 August 2022, as confirmed in the presentation by the Mayor of Almería, Ramón Fernández-Pacheco. An edition that already has the first names on the table and that come with the first big international production of Cooltural Fest, with the Argentine Nathy Peluso, as well as the pre-selected for Eurovision in Spain, Rigoberta Bandini, in addition to La La Love You, Arde Bogotá, Suu and Ede.

The mayor said that “for the City Council and for the city it is a great joy to present today the first news of Cooltural Fest 2022, because it means that Cooltural Fest, with Crash Music and the support of the City Council, has been consolidated in the cultural agenda of our city, having overcome the difficult times generated by the pandemic in mass events like this and that has made many of them have had to close the doors”.

Fernández-Pacheco wanted to highlight that “the city of Almería, with the Department of Culture and its councillor, Diego Cruz, the area director José Vélez, and his team at the forefront, has been an example of organisation of concerts and events with a firm commitment to Safe Culture. And Cooltural worked within the same parameters and demonstrated this with more than 80 events in the last two years under the name of Cooltural Go!, which has allowed us to enjoy names such as Amaral, Coque Malla, Iván Ferreiro, Love of Lesbian, Viva Suecia and Sidonie, among many others”.

If the health situation allows it, the 2022 edition will be a ‘normalised’ edition. “All the health safety parameters in force at that time will be followed, but it will be an edition that will recover the upward trend of the first two years: we will have two stages in the main concert venue and a third stage next to the beach, in the Faluca. This means that there will be around 40 artists and groups on the line-up,” said the mayor.

A line-up of which the first six names have been revealed today, but which will once again bring together the best pop-rock and indie bands on the national scene, both the established and the best emerging bands, and will also show its dynamism by opening up to other genres, making a line-up of names that can be enjoyed by a large audience. And proof of this dynamism and this constant updating of current trends are the two most outstanding names on this preview of the line-up.

The first of them will be the first major international production in the history of Cooltural Fest. She is an artist who has 7.5 million listeners on Spotify and more than a million subscribers on YouTube, where some of her video clips have more than 50 million views. Cooltural Fest 2022 will feature the hip hop, soul, trap, jazz, rap, salsa and swing of Argentina’s Nathy Peluso, who visited Antena 3’s El Hormiguero last night.

The second big name in this initial batch of confirmations is also very topical. In addition to being an artist on the rise, for the empowering nature of her lyrics and because Cooltural Fest is the first festival to be confirmed for next year in Andalusia, because she has also been chosen in the selection process to represent Spain in the next edition of Eurovision: Rigoberta Bandini.

In this first batch, one of the new indie sensations, La La Love You, the rock of Arde Bogotá, the contemporary singer-songwriter Suu and the folk of Ede have been confirmed. “And I can also advance that at the beginning of January Cooltural Fest will organise an event in which the headliner will be unveiled and there will be other surprises”, said the mayor.

For his part, Diego Ferrón, one of the managing partners of Crash Music and Cooltural Fest, pointed out that “in addition to all the programming of the stages, we have to add the complementary activities that we develop throughout the year and also on the dates of the festival, which will be revealed in the coming months”. Season tickets have been on sale for several days at www.coolturalfest.com with an initial promotional offer and have already reached a total of more than 1,200.

The Mayor also highlighted “the commitment to its inclusive nature that has already made it a benchmark. Its ‘Music For All’ Foundation, which published the first guide to make these events 100% inclusive, has shared its experience with such outstanding festivals as Sonorama Ribera in Spain and Lollapalooza in Chile. Two heavyweights on the festival circuit. Another reason to be proud”. 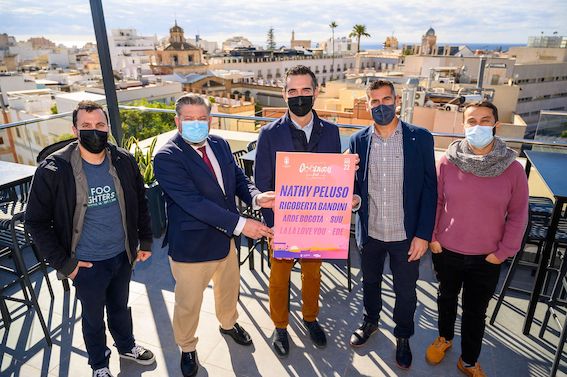