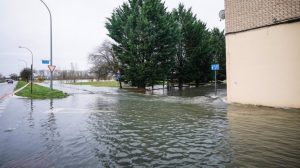 The Official Association of Geologists defends natural solutions to prevent flooding. The latest flooding of the Ebro highlights, according to these professionals, the absence of policies based on risk maps, something that is also happening in the Region of Murcia.

Floods are Spain’s greatest natural risk and cause billions of euros in losses. We have seen it this week with the Ebro. Spain’s geologists are once again sounding the alarm to remind us that, “when damage occurs, it is because it has been built on flood plains”. While recognising the differences between the north and the south, “errors are common throughout the country”, explains Manuel Regueiro, president of the Official Association.

Precisely, the risk maps recently launched by the Confederación Hidrográfica del Segura have put the main town councils of the Region of Murcia on the warpath, accusing the basin organisation of impeding development. The president of this entity appeals to common sense, recalls “the effectiveness of measures based on nature and points to public works only when necessary and studying each case on a case-by-case basis”.