– In addition, 19 offences of usurpation of civil status and 11 offences of false documentation are attributed to her.

– The arrested woman offered rooms for rent and requested money through the “Halcash” method, which consisted of sending money by mobile phone. 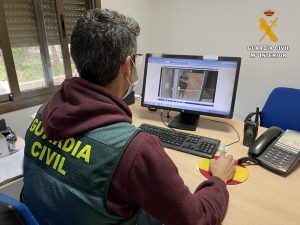 The Guardia Civil of Almeria, within the framework of the Operation “Marder”, arrested in Roquetas de Mar (Almeria) the author of 29 crimes of fraud committed through “Halcash”, usurpation of civil status and false documentation.
The Guardia Civil of Almeria initiates this investigation after the request of the Auxiliary Post of the Guardia Civil of Alájar (Huelva) for the identification of the alleged perpetrator of a scam that could reside in Roquetas de Mar.
The agents begin a great investigative work in which after knowing the modus operandi of the victim, the technological evidence obtained, and the information obtained from the complainant in Huelva, they achieve a positive identification and determine that the author carries out 29 offences of swindling, 19 offences of usurpation and 11 offences of documentary falsehood.

The perpetrator is vigilant in the advertisements published on internet portals and social networks in which, generally young students, are looking for rooms or homes to rent.
She contacts the victims through an instant messaging application, always using the same four telephone numbers, offering them rooms or homes at very attractive prices, sending photographs of homes in very good condition in an attempt to make the potential victims act hastily and not look for other options.

Once the victim has been convinced, in order to convey more confidence, he sends a photocopy of the ID card (of another person) and a rental contract with the details of that ID card via the same instant messaging application, and requires the payment of a deposit using the “Halcash” method.

The Halcash method is an operation of MOBILE CASH (a banking service that allows cash to be sent to anyone’s mobile phone immediately and securely via a simple SMS).

The perpetrator uses it as follows; the victim sends an SMS to the person they want to send the money to. In the SMS they inform the beneficiary (perpetrator) that they have an order available, the amount, the validity period and an SMS reference. The author goes to the ATM of the bank, accesses the HalCash section without a card, and the cashier gives her the money.

Once the first amount was received, usually as a down payment and in amounts not exceeding 200 euros, the arrested person tried to receive more money by the same method, arguing the need to pay for insurance, paperwork, etc…

In the final phase of the operation, the agents managed to identify the perpetrator, as well as the vehicle in which she was travelling, and proceeded to arrest her for the commission of 29 offences of fraud, in which she would have obtained 5700 euros, 19 offences of usurpation of civil status and 11 offences of false documentation.

The proceedings, together with the detainee, have been handed over to the Juzgado de Instrucción number 5 of Roquetas de Mar (Almería).