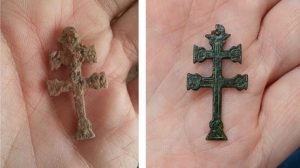 It is about 370 years old. They are two hanging bronze reproductions of the ones carried by almsmen and Jesuits when they went to evangelise the new world. The coordinator of the Caravaca museums and historian, Indalecio Pozo, explains the presence of the Cross in different parts of the world.

The Cross is especially present in Brazil and Argentina, where it is the patron saint of Missions and Santo Tome, according to José Roberto de Olivera, historian and guide in Missions.

The reliquary of the ‘Lignum Crucis’ was also very present at the canonisation of Fray Junípero Serra, in Washington, on 26 September 2015, presided over by Pope Francis. His reliquary consisted of a Caravaca Cross. The so-called Apostle of California founded nine missions, which later gave rise to American cities such as Los Angeles, San Francisco and San Diego.