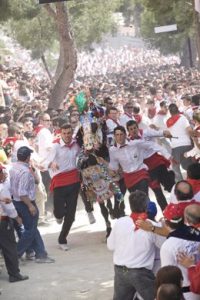 Caravaca de la Cruz will celebrate its traditional Fiestas de Mayo this year, according to the decision taken this Wednesday by the assembly of the Festivities Commission of the Royal and Illustrious Brotherhood of the Holy and True Cross, in which representatives of this institution, of the festive bodies and of the Town Hall took part.

According to sources from the Brotherhood in a communiqué, the event will be held this year “in the way it has traditionally been held until the arrival of the pandemic”, although it will be conditioned by the state of the epidemiological situation and the health regulations at that time.

“After two very hard years in which our lives and social habits have been affected and diminished by the pandemic, Caravaca deserves to celebrate its beloved festivities in honour of the Santísima y Vera Cruz as normally as possible. These festivities are a living reflection of our society, of our culture, tradition and essence of Caravaca”, said the secretary of the Festivities Commission, Simón Laborda.

For the representative of the Royal and Illustrious Brotherhood, “the people of Caravaca need to honour their patron saint, venerate her and feel her close to them; to celebrate that together we have overcome one of the worst chapters in our history, and above all to thank her for her protection”.

He wanted to convey “hope and excitement” to the local residents, but he also called for “prudence and responsibility” so that the Fiestas de Mayo can take place “as we all want and expect”.

Laborda explained that, in this way, “we are beginning to organise our fiestas as if it were a normal year, with the same effort and with even more enthusiasm and excitement than in previous years”, after a break marked by the absence of marching bands, parades, processions, street parades and noise.