At noon this Saturday, was officially opened the Juan Carlos I Park for Families in Macel, an outdoor leisure complex “for everyone who wants to enjoy it”, but mainly for the youngest of the house.

More than 11,000 square meters, 1.2 million of shared investment between the City Council of Macael and the Provincial Council of Almeria, will allow families to enjoy lifelong games that are interspersed with attractions rarely seen. Adventure games such as a thirty-meter double zip line, unique in the province. Children’s area with attractions for small children, musical games, games adapted for people with special needs, an inflatable bed of nine meters by eleven, climbing area, a bio-healthy park, picnic area, bar, soccer field. Age-specific play areas with the planting of more than 100 trees in addition to those already existing in the area, where you can listen to the sound of the different birds that nest on the premises. 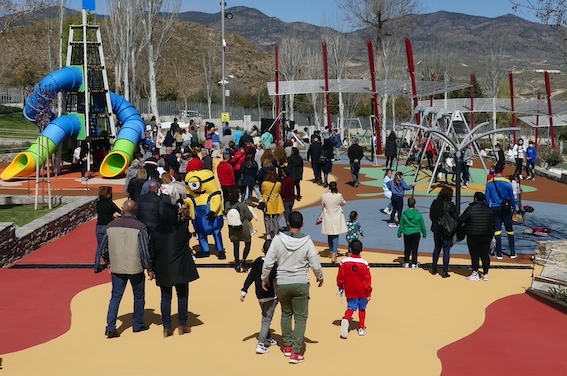 The inauguration ceremony was attended by hundreds of neighbors, in addition to members of the local corporation headed by Mayor Raul Martinez and Councillor for Public Works Emilio Cruz; the president of the Diputación de Almería, Javier A. Garcia, the vice president of Diputación, Angel Escobar; provincial deputies Jose Antonio Garcia, Carmen Navarro and Conce Perez, the president of the Commonwealth of Municipalities of Valle del Almanzora Antonio Ramon Salas and the mayor of Olula del Rio, Antonio Martinez Pascual.

For Mayor Raul Martinez, who thanked especially to all municipal workers, “today is a very important day. We have thought big and together we make dreams come true. It has been three very hard years of work, a very important investment that has had the support of the Provincial Council. This park has been made with heart and a lot of love. To the president of the Provincial Council, who is used to inaugurate many works, I say that he will inaugurate few like this one”.

The work that presides over the entrance to the park dedicated to the Pachamama, is the responsibility of the sculptor Manuel Hervás macaelero, who at the inauguration of the park thanked the council. “It is a pride and an honor to have been able to carry out this project in my town. A tribute to the land.

The president of the Provincial Council has congratulated the mayor and the City Council for “the firm commitment you have made for this park. This shows that there is a government team with a mayor at the head who wants to equalize opportunities in their municipality. Today being a Macaelero is a source of pride. You have built a municipality with a lot of effort that is at the head of the region and the province. There is no other place in Almeria like this and it is thanks to the efforts of its mayor, who is fighting to give you services and opportunities. This park is at the height of a big city”.

In this sense, Javier A. Garcia stressed that from today “the park becomes a pole of attraction for visitors from other municipalities in the region and the rest of the province. It will give social and economic dynamism to the municipality. Infrastructures of these characteristics help us to materialize two of our greatest objectives as Provincial Council: to structure the territory, to equalize opportunities between Almeria, wherever they live, because the families of Macael have the same right as those of the capital to enjoy a park like this, and to fix the population.