The measures promoted by the Diputación de Almería in the fight against depopulation consolidate its national leadership in the demographic challenge thanks to the conference ‘For an intelligent rural territory. Opportunities and solutions’, organised by Manuel Campo Vidal, to be held on Thursday 23 March in the Patio de Luces of the Provincial Institution. This morning the President of the Provincial Council, Javier A. “The President of the Provincial Council thanked Manuel Campo Vidal “for his recognition of the role that this Council and the province play as a reference in the fight against depopulation with the celebration of this conference that places us as a national example in this important issue for the future of our villages. “This conference will help us to promote the objectives that we have in common with Next Education to give visibility to the rural reality of the province and to study the opportunities for growth in our municipalities.

“In this sense, the president recalled that “from the Provincial Council we face this challenge with cross-cutting actions from all areas. All our measures are aimed at equal opportunities between Almeria residents, wherever they live. “Because by providing our towns with services and infrastructures, like those that can be found in a capital city, we will ensure that no Almerian has to leave their municipality due to lack of opportunities, and that they are free to choose where to live. “García explained that the visit to Chercos, after the press conference, was “so that Manuel Campo Vidal could see first-hand the practical examples that the Diputación is promoting in the inland municipalities to help them establish their population.

In Chercos a cash machine has been installed thanks to the Plan Against Financial Exclusion, the work carried out from the Guadalinfo Centre for digital literacy or the important work of a company like Lorusso Food, which creates wealth and employment, and spreads the name of the province through the brand ‘Sabores Almería’. In this sense, the president of Next Education has highlighted that Almeria has a competitive advantage over other provinces which is its “entrepreneurial nature” and has referred to the example of Lorusso, in Chercos, with the consequent export drive and job creation in a municipality of less than 300 inhabitants. The conference ‘For an intelligent rural territory. Opportunities and solutions’ will be held on 23 March at 10 a.m. in the Patio de Luces de Diputación.

It can be followed live via streaming that will be broadcast on the social networks of the Diputación de Almería. This initiative is aimed at mayors, councillors, Guadalinfo Centre facilitators in the province, as well as Rural Development Groups and the general public. After a short walk around the municipality, they visited the ATM that Diputación has installed in the town thanks to the Plan Against Financial Exclusion. Thanks to this measure, 33 municipalities in the province that did not have a bank now have a terminal where they can carry out their financial transactions, as well as consult the taxes managed by the Diputación.

The President of the Provincial Council took the opportunity to announce to the Mayor of Chercos the remainders that the Provincial Institution will allocate to the town. The next stop was the Guadalinfo Centre in Chercos, a fundamental space for digital literacy in rural areas since, in addition to the connectivity it offers to the residents, it instructs and helps all citizens to become fluent in the digital world. The Guadalinfo Centres are a clear example of institutional collaboration between the Diputación, town councils and the Junta de Andalucía and their work is key to equal opportunities. Finally, a visit was made to the facilities of Lorusso Food, an organic and artisanal jam and virgin olive oil company, which belongs to the gourmet brand of the province promoted by the Provincial Council ‘Sabores Almería’. 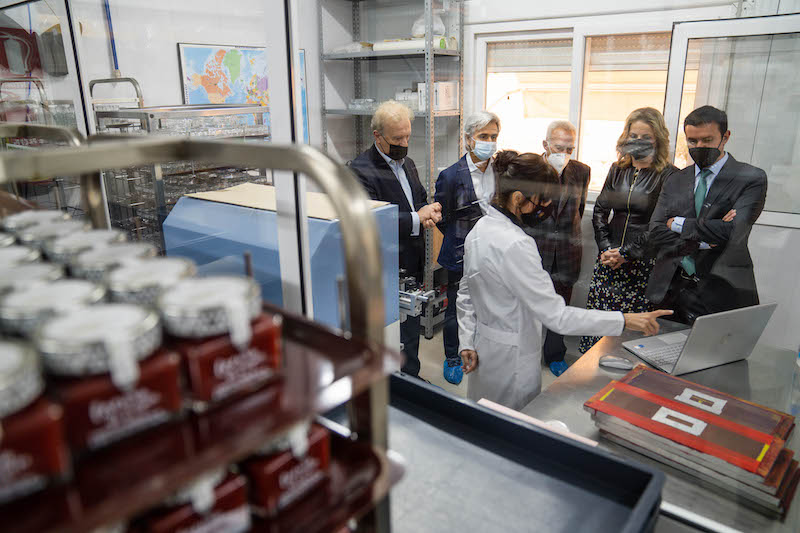 began its journey in 2015 and was integrated into ‘Sabores Almería’ in 2018. Manuel Campo Vidal has seen first-hand the entrepreneurial nature of its managers, siblings Isabel and Paco Martínez, who through their company located in Chercos export their production, around 100,000 containers per year, to more than 17 countries around the world such as the United States, Canada, Mexico, Belgium, France, Japan or South Korea, among many others. Lorusso Food, whose work has been recognised in various international competitions, is characterised by the production of jams made from 85% fruit, with a low sugar content, which are presented in attractive, original and aesthetically pleasing packaging. “I am going to incorporate the case of this municipality and the province of Almeria into my lectures”.