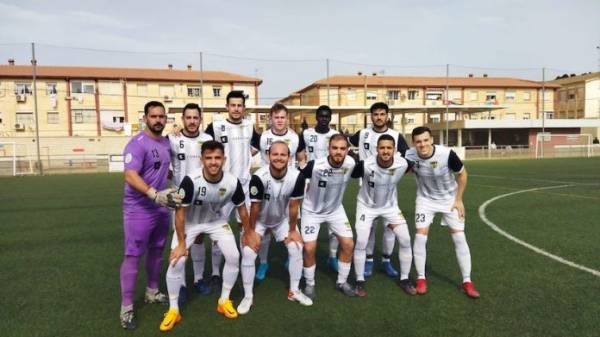 Since the Ricardo Mora-Juanma Sánchez duo have taken over the technical direction of Cantoria 2017, the team’s matches have been counted by victories. Three wins in three games played have propelled the Almanzora side to eighth place in Group 2 of the Andalusian Division of Honour after 27 matches.

This Sunday afternoon they visited bottom side CD Churriana, and only a win was in the cards for the Aurinegro, who took the lead after 29 minutes through Cerri. A header from a corner taken by Capel made it 1-0. But the locals reacted and a few minutes later, Mariano scored the provisional 1-1.

After the break the visitors came out again and in the 47th minute Miguel Angel made it 1-2.

Churriana tried again to come back but Cerri in the 50th minute scored his second of the game to make it 1-3 in a match in which Guille Cruz, with a minute to go, put the final score on the scoreboard.

A 1-4 that invites to continue working and continue to grow. Raúl Amoros and Alfonso Galera, 2 players trained in the youth categories of the club and Josemi Oller (Juvenil) and Pablo Gázquez (cadet), made their debut in Cantoria 2017, in a clear commitment to the youth team.

Next weekend Cantoria will host Casabermeja at Los Olivos.