In a recently completed operation, officers of the Guardia Civil of Almeria intercepted an indoor marijuana crop with 476 plants and investigated seven people as perpetrators of a crime against public health and another one of defrauding the electricity supply.

This action is part of the plan developed by the Guardia Civil of Almeria against trafficking, cultivation or processing of narcotic substances in the province.
The agents carried out the corresponding searches in the house, locating a large crop with 476 marijuana plants, 15 light bulbs, 15 ballasts, 2 extractors, 2 air conditioners (one of them industrial), 5 fans, 2 filters, numerous phytosanitary products and documentation.

The complex electrical installation implemented to maximise the yield of the crop resulted in excessively high consumption through illegal connection to the network.

Finally, as a result of the investigation, the Guardia Civil of Almeria proceeded to the investigation of seven people as perpetrators of a crime against public health and fraud of electricity.

The proceedings conducted by the Guardia Civil along with the detainee, are placed at the disposal of the Court of Instruction No. 6 of Almeria. 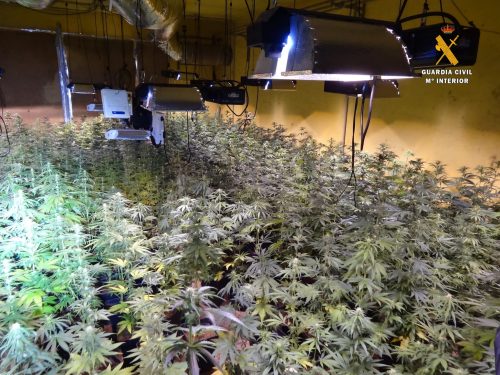 The investigation began when, during a surveillance service of isolated dwellings, the agents observed signs pointing to the existence of an indoor marijuana plantation in a farmhouse in the “Los Rincones” area of Aulago, in the municipality of Gérgal (Almería).

The characteristic smell of this type of cultivation and the permanent operation of air conditioning and air extraction machinery attract the attention of the agents who design a discreet surveillance device on the house.

The agents, in collaboration with technicians from the electricity supply company, took measurements of the electricity network and obtained indications of the existence of an illegal connection that would provide cover for the marijuana cultivation inside.