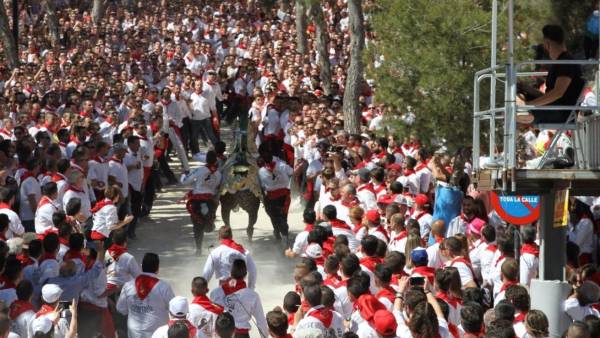 Next Monday, 2nd May, the City Council of Caravaca de la Cruz will broadcast live the Wine Horse Race, a unique celebration in the world that returns, after two years of hiatus due to the pandemic, converted into Intangible Cultural Heritage by UNESCO.

From 1 to 5 May, Caravaca de la Cruz is the setting for some of the most unique festivities in the world, which include the tradition of the Caballos del Vino, declared Intangible Cultural Heritage by UNESCO.
del Vino, declared Intangible Cultural Heritage of Humanity by UNESCO. The Festivities in Honour of the Holy and True Cross are also, as a whole, of International Tourist Interest.

The Moors, Christians and Wine Horses fiestas, in honour of the Holy and True Cross, recall a tradition that has its roots in the Middle Ages, when the town was on the border with the Nasrid Kingdom of Granada. More than 150,000 people flock to the northwest of the Region of Murcia every year to witness these unusual and passionate festivities.

Since December 2020 and after a long process of work, effort, dedication and commitment on the part of different organisations, among them, the
Bando de los Caballos del Vino, the City Council of Caravaca de la Cruz and the Ministry of Culture, which have counted on the collaboration and commitment of an entire people, UNESCO decided that the only candidacy presented by the kingdom of Spain, the Caballos del Vino, would be declared
Intangible Cultural Heritage of Humanity, with the support of the 22 member countries of the Intergovernmental Committee for the Safeguarding of the Intangible Cultural Heritage.

Since then, the festival has not been able to take place due to the health situation caused by Covid-19. This 2022 would be the first year in which the horses will climb the slope of the castle surrounded by crowds of locals and visitors, as they have always done, with the relevant condition that gives them the status of being a World Heritage Site.