The Regional Minister for Agriculture, Livestock, Fisheries and Sustainable Development, Carmen Crespo, visited the Almerian municipality of Tíjola this Sunday, in the midst of the festivities in honour of the Virgen de Fátima, and did not hesitate to support the local council’s petition to have them declared of Tourist Interest in Andalusia “because they deserve it”.

Crespo highlighted the unique characteristics of a festivity that has been celebrated in the municipality since 1951, such as the carpets of coloured sawdust shavings that are spread throughout the streets of the municipality, as well as the dozens of rockets that are launched into the sky. The councillor particularly highlighted a carpet that refers to the need for peace in Ukraine, a war which, as she explained, “has us all so worried”.

The councillor praised the work of the residents of Tíjola with the carpets of sawdust and the great reception of this celebration, “after two years of hiatus due to the pandemic”, while stressing the importance of these festivities, “not only in the area of its region, the Almanzora, but for the entire province of Almería”.

The Mayor of Tíjola, José Juan Martínez, thanked the Councillor Carmen Crespo for her presence and her support for the municipal petition to have the festivities declared a Festival of Tourist Interest in Andalusia. The councillor stressed that the carpet of coloured sawdust shavings is “one of the greatest examples of ephemeral art in our autonomous community”.

Carmen Crespo invited Andalusians to mark in their calendars these festivities, which she described as “impressive”. 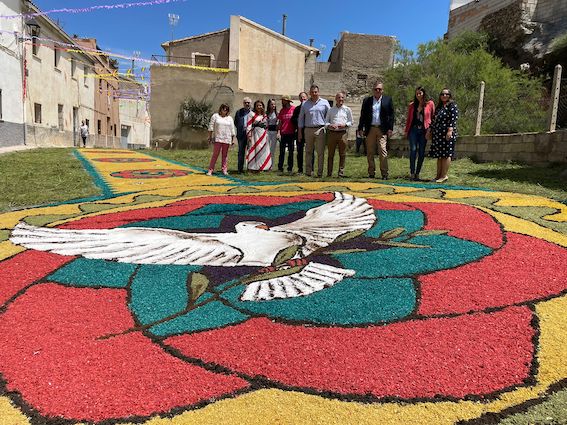