If every 15 May the people of Albox have an unavoidable date with San Isidro Labrador, this year the date was even more relevant. Not only could they once again celebrate the traditional festivities in honour of the saint, but they were also commemorating the 4th centenary of his canonisation in 1622 by Pope Gregory XV. For these two reasons, decided to extend the celebrations for two weeks.

It all began in the main church of Albox, the Parish Church of Santa María. The sacred image of the Labrador was taken there and, on Saturday 7th May, marched in a joyful pilgrimage to the hamlet of Llano de los Olleres, where it has been kept for more than half a century. The pilgrims, after receiving the blessing of the parish priest Enrique Antonio Cortés Díaz, set off along the bed of the Oria watercourse. Recreating themselves in the unaccustomed greenery of the path, the beauty of Creation and fraternal coexistence marked the passage. By sharing food and faith, the journey was lightened and in a short time they returned the image of St. Isidore to the Parish and Votive Church of Our Lady of Mount Carmel. A simple prayer and a pleasant supper served to relax the pilgrims from their fatigue. 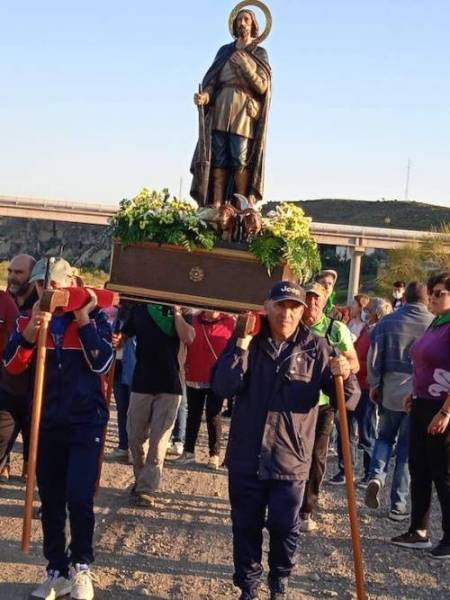 During the following days the popular festivities followed one after another, with the inevitable paella, music and typical games for the little ones. On the afternoon of 15 May, the secretary of the Mayordomía, Juana García Carmona, presented the book “San Isidor Labrador, un santo de la puerta de al lado” (Saint Isidor Labrador, a saint from next door). Written by the parish priest, Don Antonio Jesús María Saldaña Martínez, it narrates the life of the Saint based on different texts from the magisterium of Pope Francis.

Mass and procession, full of music and fireworks

Afterwards, the Holy Mass of thanksgiving was celebrated, sung by the Parish Choir of the Concepción de la Loma de San Francisco. It was attended by various municipal authorities, and practically the whole of the Albojense brotherhood and association scene. The Mayordoma Mayor, Doña Juana García Carmona, thanked the Church for the mission entrusted to her and for the participation of everyone in the acts of this IV Centenary of the Isidror.

Finally, the procession, longer than usual, culminated with the beautiful gesture of showing the image of San Isidro Labrador the fields, in the hope of obtaining his intercession in the agricultural work. The Cuadrilla de Ánimas del Saliente and the fireworks provided the musical note, which warmed the hearts of all the devotees. A centenary, without doubt, to sow Easter joy around the devotion to Saint Isidro Labrador.

A new altarpiece for the Saint

As an offering for the IV Centenary of his canonisation, the Mayordomía de Nuestra Señora del Carmen and the Neighbourhood Association commissioned a beautiful ceramic altarpiece to decorate the niche that houses the image of San Isidro. In this work, two episodes of his life appear that reflect two characteristic features of his spirituality: his marriage and his paternity. A lower cartouche depicts Pope John XXIII proclaiming his patronage over the farmers of Spain. Four angels, distributed throughout the altarpiece, combine scrolls with allusive biblical texts and elements of the saint’s work.