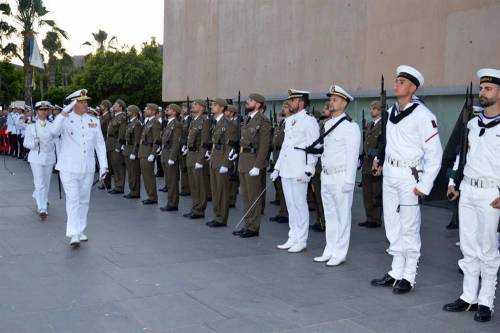 On Friday afternoon, the Music Unit of the Tercio de Levante de la Infantería de Marina, with the collaboration of the tenor Pablo Martínez Gil and students and teachers of the Professional Conservatory of Music of Cartagena, offered a commemorative concert in the Plaza del Ayuntamiento.

This was followed by a solemn joint lowering of the flag in the vicinity of the National Museum of Underwater Archaeology (ARQVA). The ceremony was presided over by the Admiral of Maritime Action, Vice Admiral Juan Luis Sobrino Pérez-Crespo, who was accompanied by the Mayoress of Cartagena, Noelia Arroyo Hernández and the Admiral-in-Chief of the Cartagena Arsenal, Vice Admiral Pedro Luis de la Puente García-Ganges, among other civilian and military authorities.

The Force that took part in the lowering of the flag was made up of sections of the 73rd Anti-Aircraft Artillery Regiment (RAAA-73) of the Spanish Army, the Air Force’s Alcantarilla Air Base, the Command of the Maritime Action Force Units of Cartagena (MARCART), the Marine Infantry School “General Albacete y Fuster” (EIMGAF) and the Guardia Civil.

In addition, the Music Unit of the Marine Infantry’s Tercio de Levante (TERLEV), as well as a Battery of Cannons from the 73rd Anti-aircraft Artillery Regiment of the Spanish Army and a mixed flag-bearing detachment joined in the celebrations.

To join the event, the force paraded from the Naval Museum to the ARQVA, along Paseo Alfonso XII and, at the end of the event, returned along the same route.

With the celebration of this day, the Armed Forces publicise the work of defending the interests of Spain, offering cultural and traditional events such as the concert and the lowering of the flag, various exhibitions and displays.

Today, Saturday, on the esplanade of the dock of the Juan Sebastián de Elcano cruise terminal in Cartagena, citizens who so wish may visit a static exhibition of material, an information point of the Navy, the offshore patrol boat ‘Infanta Elena’ of the Maritime Action Force and the minehunter ‘Sella’ of the Mine Action Force, the Cartagena Naval Museum (during morning hours), the Cartagena Arsenal and the Submarine Base with guided tours (with two passes in the morning and two passes in the afternoon). In addition, from 11.30 a.m. to 12.15 p.m., there will be a canine exhibition by the Marine Infantry’s Tercio de Levante Cynological Unit.