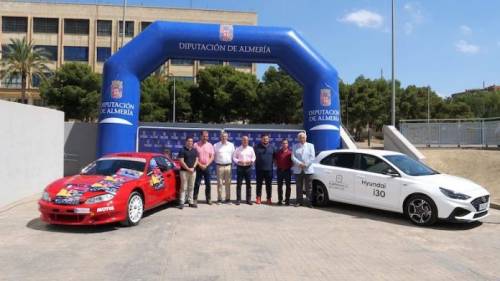 Yesterday, Tuesday, the Moisés Ruiz Sports Pavilion hosted the presentation of the eighth edition of the Rally Valle del Almanzora – Sierra de Los Filabres, which will take place on the 1st and 2nd of July, filling the roads of seven municipalities in the region with excitement: Olula del Río, host of the event, Zurgena, Albanchez, Líjar, Chercos, Alcudia de Monteagud and Macael.

Organised by the Motor Club Balcón del Almanzora, in collaboration with the Diputación Provincial de Almería, the Andalusian Automobile Federation and the participating municipalities, the VIII edition of this Rally is the third qualifying event for the Andalusian Championship of Asphalt Rally and Regularity, and also scoring for the provincial cup of motoring ‘Trofeo Diputación de Almería 2022’. The Rally has about 40 participating teams, a caravan formed by 500 people who manage to hang the full sign in the hotels in the area.

The deputy of Sports, José Antonio García, has thanked the participating municipalities, organizers and sponsors for the promotion of this competition that “in a short time has become one of the most important events in Andalusia. It is a very important event that has an impact on several of the Diputación’s main objectives, as with this type of event we are working to offer alternatives that help us to fight against depopulation and to intensify the combination of sport and tourism in the province of Almería”.

The Mayor of Olula del Río, Antonio Martínez Pascual, highlighted the high number of teams taking part, around 40, and the important publicity that the event gives to the region in terms of sport and tourism. He also thanked the Diputación, the Federation and the Club Balcón del Almanzora for their support in making the championship a reality and added that “the rally is the backbone of our towns, makes the region and gives us great visibility”.

For his part, the president of the Andalusian Automobile Federation, Manuel Alonso, highlighted the region’s love of motor racing and the great success that the competition has experienced in its eight editions, positioning it as “one of the best rallies in the whole Andalusian panorama. It has grown spectacularly and a large part of its success lies in all the people who make it possible, such as the Club Balcón del Almanzora, which has diversified motor racing throughout the region”, while stressing the tourist potential for the area and the province.

Finally, the president of the organising club, Salvador Segura, reviewed the characteristics and route of the event, in which Zurgena is taking part for the first time and Macael is back, and emphasised the safety measures, that the signposts must be respected, and called on all fans to enjoy motor racing in the Almanzora this weekend.

The presentation at the Moisés Ruiz was attended by mayors and councillors from the municipalities of the region through which it passes. The rally has a total distance of 424.60 km, with 11 timed sections totalling 106.10 km. The event is divided into a total of seven sections, with one stage and five stages to be recognised.

Next Friday, July 1st, the Federation will broadcast live the Start Ceremony from Olula del Río from 20:00 hours. Likewise, on Saturday 2nd July, the timed stages will be broadcast live from first thing in the morning.

The event will be broadcast live via streaming by the FAA for the second consecutive year through its social networks and You Tube channels https://www.youtube.com/results?search_query=faatv, and on Twitch https://m.twitch.tv/prensafaa/home and the signal will also be shared with local television stations in the area.

This television broadcast represents more than 6 hours of live broadcast where interviews with drivers, teams and authorities will also be interspersed.

Registration for the rally will close at 20:00 on Friday 24 June 2022. All the information about the rally is available on the web www.codea.es