In a recent action carried out in the municipality of Huercal-Overa, the Guardia Civil investigated two people aged 58 and 33, as perpetrators of a theft offence as they were unable to prove the origin of more than 650 kg of fruit and vegetable produce that they were transporting on the A-7 motorway towards Murcia.

This action is part of the ongoing work of the Guardia Civil in the province of Almeria for the resolution and prevention of crimes against property.

The action begins as a result of a patrol that is carrying out public safety work, notices that a van circulating on the A-7 motorway towards Murcia, is doing so at an abnormally low speed and apparently with excessive load. 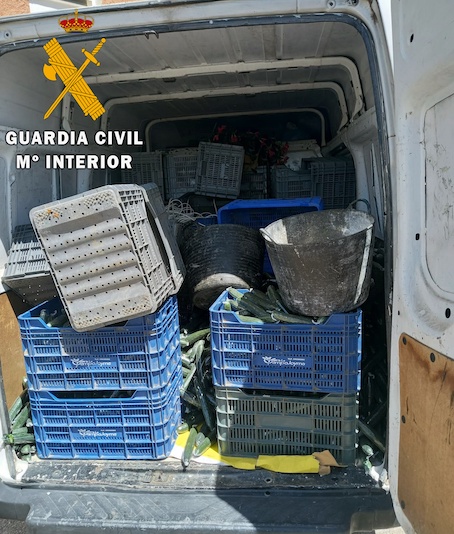 The Guardia Civil personnel consulted the van’s registration number in the database and found that the usual drivers had a number of police records for offences related to the theft of fruit and vegetable produce, which led the officers to stop the van’s driver.

Once the two occupants were identified and it was found that they also had previous convictions for similar offences, they proceeded to check the load and on observing the large quantity of fruit and vegetable produce being transported, the agents asked for the invoice or similar to prove its origin, but were unable to do so as they lacked the documentation, claiming that they had been found.

As a result of this action, the Guardia Civil of Almeria intercepted 6 boxes of 30 kg of cucumber, 11 boxes of 30 kg of melons, 2 boxes of 20 kg of courgettes and 4 boxes of 25 kg of aubergines of illegal origin and investigated the two people who were transporting them as perpetrators of a theft offence.

The proceedings, together with the detainee, were handed over to the Huercal-Overa Examining Magistrate’s Court on duty.

Due to the fact that the products seized are perishable, they are placed at the disposal of the charity.