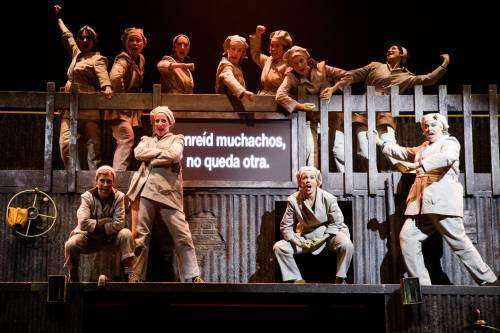 After the success of Lehman Trilogy, which could be seen at the San Javier Festival in 2018, its director, Sergio Peris Mencheta, repeats with the same author, the Italian Stefano Massini, and a theatre adaptation of his play “Ladies Futbol Club”, a true story of women’s football that emerged in England in the middle of the First World War. The play tells the story of the women who at that time filled the factories, many of which were converted into armaments factories, due to the lack of male labour, who were at the front. During breaks, they began to kick a ball and ended up forming teams, playing in championships and filling stadiums all over the country, known as the “munitionettes”. After the war, women’s football was banned and they were ostracised.

This is the story that Sergio Peris Mencheta set out to tell, with a look at the origins of women’s football, now enjoying great popularity and international recognition, which sadly coincides with another war in Europe. For the director, however, the story goes further and explains how women take a step forward in their role as wives and mothers, no longer being invisible thanks to football. The play, which lasts two and a half hours, adopts, in part, the format of a musical, with original music composed by Litus Ruiz with the musical director Joan Miquel Pérez and the vocal direction of Ferran González, along with a lot of period music and other current themes such as “And So It Goes”, by Billy Joel, which also plays in the show.

“Ladies Futbol Club”, by Barco Pirata Producciones, was recently premiered in Valladolid before being performed at the Teatros del Cana,l in Madrid, to great acclaim from audiences and critics who have highlighted the great work of the eleven actresses who make up the cast, who sing, play instruments, and give life to various characters. The cast is made up of Noemi Arribas, Xenia Reguant, Silvia Abascal, Ana Rayo, María Pascual, Nur Levi, Alicia González, Carla Hidalgo, Irene Maquieria, Andrea Guasch, Diana Palazón and Belén González.