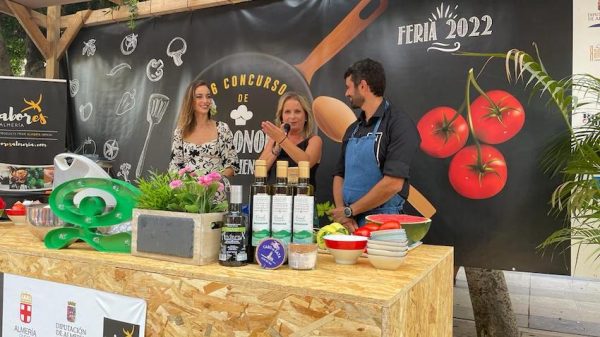 The gastronomic space set up by the Department of Culture and Education of the Almería City Council and the Provincial Council, through its gourmet brand ‘Sabores Almería’ is another of the successes of this year’s Feria de Almería. If every day the attendance at the different meetings, presentations and showcookings is being quite significant, today all records have been broken with the presence of the chef Enrique Sánchez, known for his television show on Canal Sur Television, where he is already approaching 2,150 broadcasts.

Both the Councillor for Culture, Diego Cruz, and the Deputy for Agri-Food Promotion, María Luisa Cruz, accompanied the chef in his demonstration of the preparation of two dishes. On the one hand a gazpacho without bread (therefore gluten-free) made from watermelon and apple, “to help thicken it”, and some ‘entomatás’ breadcrumbs, “as the usual thing is to dip them in water, it is better to dip them in tomato and pepper, which will have more flavour, together with the chorizo and bacon”, said the chef.

The Councillor for Culture, Diego Cruz, has shared the kitchen for a while with Enrique Sánchez, and has highlighted “the excellent level of participation that this space for Almeria’s gastronomic cuisine is having”. The deputy, for her part, also welcomed the chef and thanked the public who had gathered today on the Paseo to attend this activity. Finally, she recalled that the aim of this type of initiative is to “highlight the quality of the products and agri-food companies in the province of Almeria and ‘Sabores Almeria’, and that they are increasingly in demand by all consumers”.

His presentation included hilarious anecdotes and useful tips, from how to hold a knife, from its centre of gravity, or how to choose a watermelon or melon that is at the right point of ripeness. At the end of his showcooking, he joined the jury of the 26th Almeria Gastronomy Competition, but not before giving away the pot in which he cooked, taking dozens of photos and signing books and even fans for those present and fans who packed the Paseo de Almería.

Enrique Sánchez, born in Seville and from Malaga by adoption, swapped the Faculty of Medicine for his great passion: cooking. After finishing his studies at the Escuela Superior de Hostelería de Sevilla, he began a long apprenticeship in renowned and prestigious restaurants in Spain and abroad. Countries such as the United States, Japan, Mexico, Portugal, Italy, Russia and the Dominican Republic have witnessed his years of training in the kitchen.

In 2010 he left his role as a teacher at the Escuela de Hostelería de Sevilla to make the leap to television. During these years, “Cómetelo” (Canal Sur) has become a true benchmark for cooking programmes on television. Author of several best-selling books, television presenter (‘La Báscula’, ‘Objetivo Chimborazo’, ‘El gusto es nuestro’, ‘Cocina con Clan’, ‘Menuda Noche’), he has travelled to more than 15 countries with presentations and gastronomic demonstrations.

He currently combines his television work with a small catering business, advising food companies and collaborating with different charities and foundations.