The mayor, José Miguel Luengo, and the councillor for Public Services, María Dolores Ruiz, today visited the works to improve a rainwater passage between the Los Ríos neighbourhood and La Calavera, which will increase drainage capacity and prevent the stagnation of water that used to occur in some streets of La Calavera during torrential rains.

José Miguel Luengo explained that the works, which are being carried out at the level of Calle Río Benamor, consist of replacing the three current 250-metre diameter pipes with four 600-metre diameter pipes, “so that rainwater will pass through much more quickly without harming the residents of La Calavera”.

The works, which will be finished in the middle of next week, will cost 20,000 euros and are part of the actions that the San Javier Town Hall is carrying out to improve the drainage of rainwater in the municipality, explained the Mayor of San Javier, José Miguel Luengo, who reiterated his request to the Ministry of Ecological Transition to provide solutions upstream with the construction of check dams in the Cobatillas wadi, to contain the force with which the water reaches the municipality. 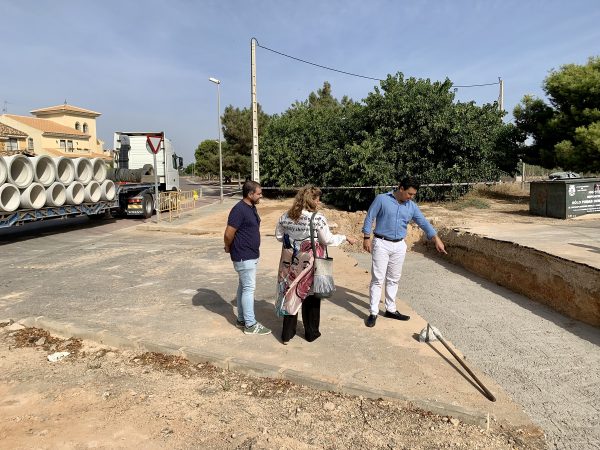 Works worth 1.1 million euros
Improvements to increase the capacity of the rainwater pipes between the Los Ríos neighbourhood and La Calavera are included in one of the two lots of public works recently awarded by the San Javier Town Council for a total amount of 1.1 million euros. The rest of the works will begin in the next few days in different parts of the municipality, such as Calle Monasterio de Las Palmas, which links the Los Ríos neighbourhood with the municipal sports centre, where the asphalt, lighting, cycle lane and a pedestrian pavement will be renewed.

Another of the works to start immediately is the urban renewal of several streets (Abarán, Yecla, Orihuela and others) next to the “La Paz” school, Castellón and Extramuros streets, in San Javier and a section of Virgen del Consuelo, in Santiago de la Ribera. The services will also be improved on Avenida Principal, Calle Siete Higueras and Calle Rosario Bernabéu, among others, in El Mirador, as well as improving accessibility between Avenida Mirador and Pinatar, opposite the Dos Mares shopping centre.