Mar Menor F.C. has released new kits for the teams of its School which has 450 players of all categories, from the 3,4 and 5 years of the Chupete category to the youth subsidiary in Preferente. The Mayor of San Javier, José Miguel Luengo and the Councillor for Sports, Sergio Martínez, together with the head of the School, Iván Navarro, presented the colours of the shirts today at the San Javier Town Hall. The blue of the Mar Menor, will coexist with bright shades of green, orange and red this season in which the club hopes to continue with the progression experienced by the School in recent years, with teams in the top categories in almost all age groups. Promoting sport and instilling values through sport is the main objective of the work with the youngsters, said Iván Navarro, who expressed his gratitude for the facilities at the Pitín Stadium and the support received from the San Javier Town Council, through the Sports Department. 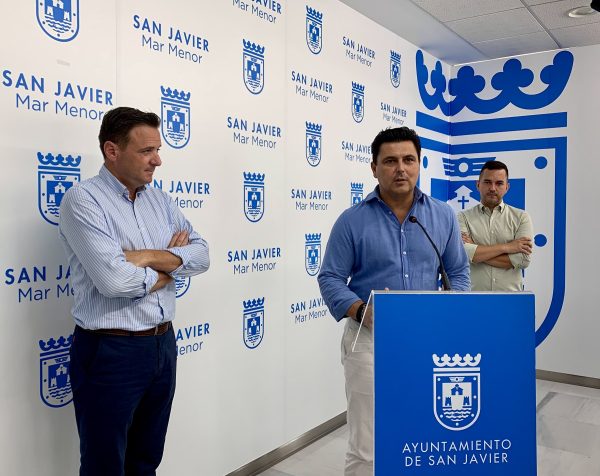 The Mayor of San Javier, José Miguel Luengo wished the School the best of luck with the new kits and thanked the Club for “its commitment to grassroots football and the stimulus it is injecting into the Club through the first team that made us vibrate last season”. The Mayor highlighted the importance of Sport in municipal policies with investments such as a new football pitch and the renovation of the Pitín grass, among others, already completed and others in the pipeline. For his part, the Councillor for Sports, Sergio Martínez, praised the work of the Club and underlined the importance of clubs in promoting sport, especially at grassroots level, in the municipality where more than 60 clubs are benefiting from the line of aid for competition that the City Council calls annually for a total amount of 170,000 euros.