The center of San Javier, will host the “Great Medieval Market Villa de San Javier” to be held from 15 to 18 September with more than 50 stalls and a varied program of entertainment activities during the four days. The mayor, José Miguel Luengo and the councilors of Culture, David Martinez and Commerce, Hector Verdu, presented this morning the market, organized by both departments and aims to revitalize the town center with a nod to local history.

David Martinez recalled the late medieval origin of the population that would eventually become the municipality of San Javier and the constitution in September, although many years later, the City of San Javier, which this month celebrates 186 years. The way to celebrate the anniversary with a market that goes back to the time in which the population was gestated “will fill with magic, light, color and history San Javier these days,” said the mayor of Culture. 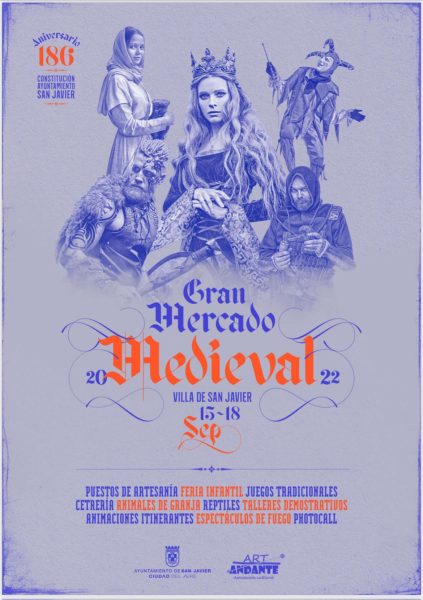 The association Arte Andante, which is responsible for the development of the Market, was also present with the Queen of the Snows who announced the presence of more than 50 stalls among which there will be crafts, food, decoration, and many entertainment activities such as children’s workshops, farm, falconry, fire shows and a children’s fair, among others. The medieval atmosphere will extend around the walls of the church of San Francisco Javier, in the center of town. On Thursday September 15 at 20h will take place the opening of the Market which will remain open until Sunday 18 at 15h, with opening hours from 11:00 to 14:00 and 18:00 to 00:00.

The mayor, José Miguel Luengo stressed the seasonal and dynamizing value of an event of this nature, especially at the end of the summer season. Luengo stressed that this is an activity for all ages that can be enjoyed with the family, and invited neighbors and visitors to “come to the center of San Javier and enjoy these days of the market and the medieval atmosphere that unfolds”.