The Guardia Civil of the Command of Almeria in the course of the operation “Jarli”, arrested two men, 30 years old, residents of Almeria, as responsible for an indoor cultivation of marijuana (Cannabis Sativa) in a warehouse located in the area of El Barranquillo in the town of Líjar and therefore as perpetrators of crimes against public health and fraud of electricity.

This operation, known as “JARLI”, began as a result of information received anonymously through the different channels that the Guardia Civil has open for the attention and collaboration of citizens.

As a result of the information received, the Guardia Civil de la Comandancia de Almería started different surveillance operations around the ship, with positive results after different types of technical verifications. At the same time, two illicit connections for the fraud of electricity and a video-surveillance system were located to detect police action. All this made it possible to identify the two people responsible for these criminal activities.

Following the investigation, the Guardia Civil of Almeria carried out an inspection of the warehouse, where, in addition to neutralising two fraudulent connections to the electricity supply network, 150 marijuana plants (Cannabis sativa) were seized, most of them in the process of drying and 4 in an advanced state of flowering, as well as all the usual material used to optimise the yield of the crop (a/c equipment, extractors, lamps, etc.). 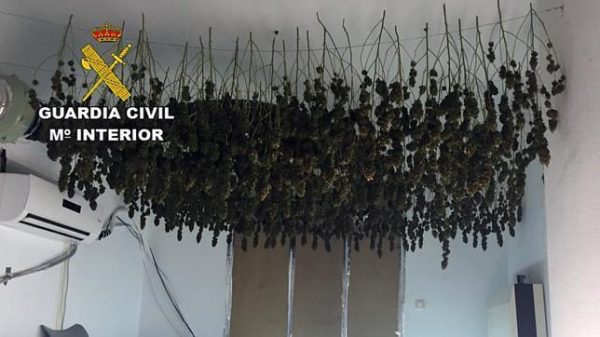 As a result of operation “JARLI”, the Guardia Civil of the Almeria Command located and seized an indoor marijuana (Cannabis Sativa) crop, neutralised two fraudulent connections to the electricity network and arrested two men as perpetrators of crimes against public health and electricity fraud in the town of Líjar (Almeria).

It should be borne in mind that this type of criminal activity poses an additional risk and inconvenience to the public. Not only because of the characteristic smell of these activities, but also because of the nuisance caused by the incessant noise of the a/c and ventilation equipment, common in indoor marijuana (Cannabis Sativa) crops, together with incidents of power cuts due to overloading of the network as a result of illegal connections.

The proceedings, together with the detainees, were handed over to the Court of First Instance of Purchena (Almeria).

The Guardia Civil of Almeria recalls the permanent availability of communication channels with citizens (telephone 062, web www.guardiacivil.es and the application “Alertcops”).