Last weekend, the municipality of Tíjola dressed up for triathlon. The town held an adult cross triathlon competition on Saturday and a junior triathlon on Sunday. In total more than 300 triathletes of different categories participated in the different competitions.

On the afternoon of Saturday 24th September, the 105 triathletes registered for the adult race met at “La Balsa de Cela”, as this was the starting point for a Super Sprint distance race in which the participants had to complete a course of 250 m swimming, 6 km MTB and 1.6 km running.

The Tíjola City Council, with the collaboration of C.T. Tíjola – Ociodeporte Baza, the Provincial Council of Almería and the Andalusian Triathlon Federation, had prepared a type of race with a semi-final and final in a time trial format, in which 3 participants would start every 20 seconds. The 60 best classified male participants and the 25 best classified female participants would go on to compete in the final. From the sum of the points of the two starts, the winner of the race would be determined.

As if all this were not enough, the race also counted towards the I Circuito Provincial de Triatlón Diputación de Almería 2022.

The men’s competition could not have been more evenly matched as the first two finishers obtained the same score. In the end it was Alejandro Salmerón, from Triatlón Tíjola – Ociodeporte Baza, who took the victory after finishing first in the Final. Second place went to Juan Andrés Cano, also from Triatlón Tíjola – Ociodeporte Baza. Third place went to Ahmed Kanafi, from C.D. Vas. 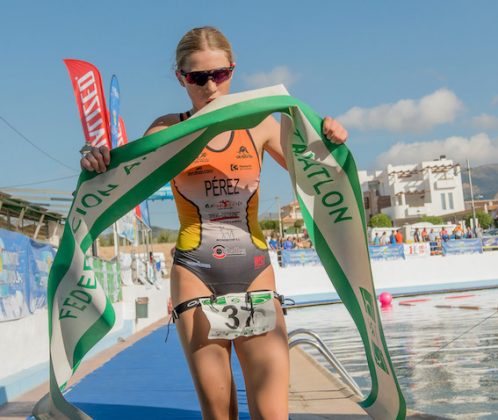 In the women’s race the winner was María Pérez, from C.D. Galosport. Second place went to Jennifer Aparicio, María’s teammate in the C.D. Galosport. The women’s podium was completed by the local athlete, Encarni Martínez, from Triatlón Tíjola – Ociodeporte Baza.

After the exciting day experienced on Saturday, on Sunday 25th September it was the turn of the minors. The race had 201 registered participants who would start at 9:00 am according to their category.

The starting point, as on the previous day, was “La Balsa de Cela” and the transition and finishing areas were located nearby.

The Tíjola Town Hall, as organiser of the event, in its great commitment to grassroots sport, wanted the event to form part of the XI Andalusian Triathlon Circuit for Juniors, scoring for the II Andalusian League of Triathlon Schools and for the I Provincial Circuit of Triathlon for Juniors Diputación de Almería.

For the organisational tasks, the City Council had the collaboration of Triatlón Tíjola – Ociodeporte Baza, the Diputación Provincial de Almería and the Andalusian Triathlon Federation.

The event also hosted the Andalusian Triathlon Cadet Championship, so much of the attention was focused on this competition. The participants in this category had to complete a course of 300 m swimming, 8 km cycling and 2 km running. 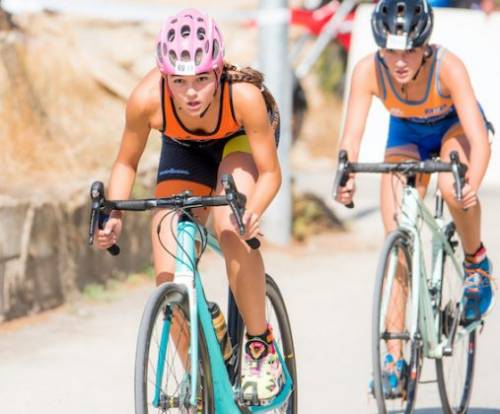 Marta Pérez, from Montilla-Córdoba Triathlon, was proclaimed Andalusian Cadet Triathlon Champion by completing the course in 00:29:48. It was a very close competition of a very high level, but the great superiority of Marta in the foot race made her take the victory and the Championship. Her teammates Paula Jurado and Ana Sanchez, took second and third place respectively.

If we saw a very high level of triathletes of Montilla-Córdoba Triathlon, the male cadets of the Cordoba club were no less and also dressed the podium of the VII Junior Triathlon “City of Tíjola” in orange, yellow and black to occupy the top 3 positions.

Antonio Marqués was the one who climbed to the top of the podium getting the title of Andalusian Cadet Triathlon Champion in this 2022. Antonio was the fastest to cross the finish line in first place, with a very disputed finish, in a time of 27:17. Just 2 seconds behind Antonio was his teammate Hugo Arias. Third place went to Juan Pablo Vera.