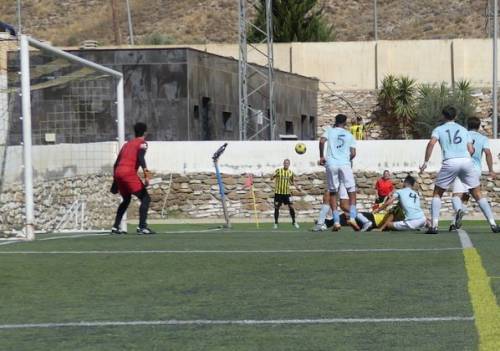 One of the maxims of football says that those chances that you don’t manage to score in your opponent’s goal, you end up suffering in your own. Something of that happened this Sunday lunchtime at the Los Olivos municipal stadium, where the home side had four clear-cut chances in the first half hour.

In the 18th minute, Migui headed a cross into the area that was turned back by the crossbar. A minute later, Guille Cruz failed to head a ball under the goal with the keeper beaten. In the 28th minute, Miguel Ángel’s left wing run was blocked by Raúl, Berja’s debutant goalkeeper. In the 31st minute, Abdou threw a ball over the goal that fell free for him to finish.

In the 38th minute, a local mistake, after a very well-conversed free-kick, left Dani alone in front of Guille, who could do nothing against the sky-blue 11. That was the turning point of the game.

In the second half, the Berja team balanced the pitch. The game became very tight and disputed; they were playing what the visitors wanted, which was for nothing to happen.

Ricardo’s gamble of fielding two strikers like Cerri and Abdou in the Aurinegro team was not working. He moved the bench and brought on more experienced players. He left Abdou as a 9 and Capel and Leo tried to revolutionise the game.

With 15 minutes to go, the home side, boosted by their fans, played with a burst of energy and pushed their opponents back into their own area, but without managing to create any real danger in front of the goal defended by Raúl.

Seven minutes of stoppage time were not enough to get the equaliser, against an opponent who could only have scored one more goal if they had been tidy and desperate.

Cantoria still lacked a nine-goaler. Nobody knows where he is or what his name is, but until they find him, scoring a goal will be a difficult task and they will have to suffer.