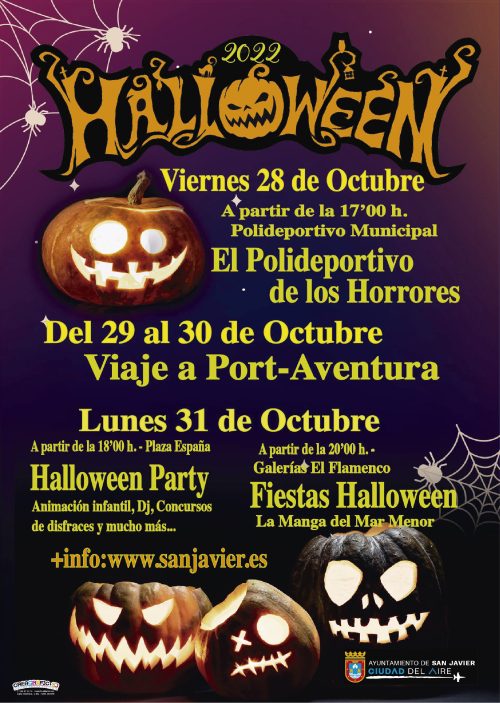 San Javier celebrates the popular Halloween party with the participation of different councils that have organised themed activities such as “El polideportivo de los horrores”, which will be held on the 28th of October in the municipal sports centre of San Javier. The “Halloween Party” will set the atmosphere in the Plaza de España in San Javier on Monday 31st October and in La Manga del Mar Menor the magic of Halloween will flood Galerías El Flamenco, from 20:00h. In addition to the Sports, Culture, Festivities and Commerce Councils, the Youth Council continues the tradition of its trip to PortAventura, which will leave with places already sold out to enjoy the party that the amusement park prepares on these dates.

The councillor for Culture, David Martínez and the councillors for Fiestas, Isidoro Miñano and Commerce, Héctor Verdú, presented the programme which is designed “to celebrate with the little ones as a family”. The first celebrations will take place at the sports centre in the last week of October with activities organised by the different sporting modalities, culminating on the afternoon of Friday 28 October with an invitation to come in fancy dress and a passage of terror which will be set up in the cabins of the complex, together with other themed activities.

With drama teacher and actress, Judith Arteaga as master of ceremonies, the Halloween Party will be held in the Plaza de España in San Javier on Monday 31st October from 18:00h with activities, games, live music, popcorn, competitions and fancy dress for all the family. In La Manga del Mar Menor, with the collaboration of the Asociación de Ocio y Tiempo Libre de La Manga del Mar Menor, a Halloween night has been organised in Galerías El Flamenco, where, among other activities, there will be an elaborate horror show.