The Villa de Fines women’s indoor football team continues to count its matches by victories. This Sunday afternoon they beat CD Colegio Claret of Seville by 4-2, match corresponding to the third day of the División de Honor de Fútbol Sala.

A hard-fought victory for the team coached by Francis Cano, who faced a disciplined team who play a disciplined and orderly football. 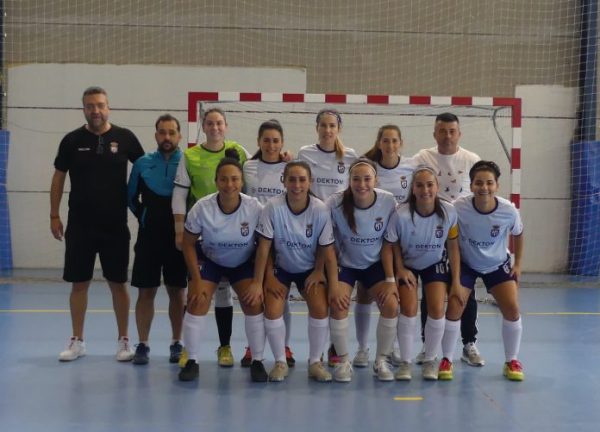 The match had the peculiarity that all the goals were scored by the Villa de Fines players. In the 11th minute of the first half Johanna, trying to clear a crossed ball, put Estrella out of position and gave the visitors the lead.

In the 16th minute, Nerea levelled the scores after a ball fell to her after the post had returned to Karen. Nerea hit the ball dry and hard into the Claret goal. A 1-1 draw ended the first half.

The second half was more of the same. Fines tried to break the Sevillian resistance, based on skill and individuality. It was Karen – the competition’s top scorer – who made it 2-1 in the third minute of the second half, who, in a one-on-one with María Jesús, classily flicked the ball on and put the Almanzora side ahead.

In the 7th minute, Mandi, surely one of the most incisive players of the visitors, shot at goal and a rebound in the sky-blue defence put Estrella out of position again. It was 2-2 and it was back to square one.

Nerea again, in the 9th minute, assisted by Carmen, pushed the ball into the goal. The definitive 4-2 was the work of Karen, who after fighting for the ball won the position to the rival defence and placed the ball far from the reach of María Jesús.

Another victory for Villa de Fines (3 out of 3), who are one of the unbeaten teams in the competition.