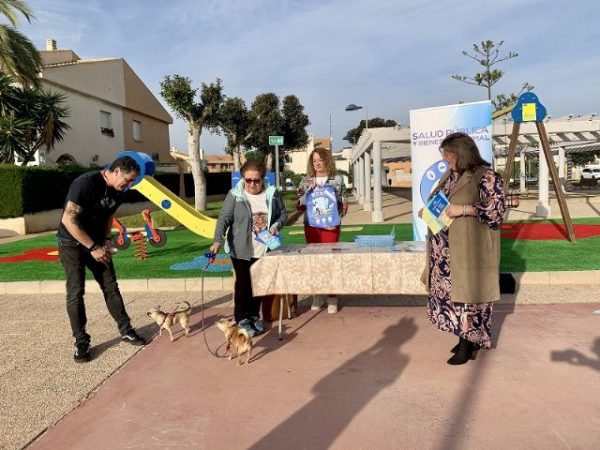 The councillor for Community Services and Parks and Gardens, María Dolores Ruiz, today stressed the importance of raising awareness among pet owners about their health and care obligations and the regulations they must comply with when they go out for walks with their pets. The councillor visited one of the actions regularly carried out by the Department of Health to disseminate the regulations on animal ownership and awareness campaigns such as “Pee-pee destroys”, which has been carried out today in the park of La Fuensanta, in Santiago de la Ribera.

Staff from the council went there early in the morning to coincide with the first walks of the day that owners give their dogs and took the opportunity to hand out explanatory leaflets and bone-shaped containers for the bags in which to collect the excrement. They also hand out a small plastic bottle in which water and vinegar are dissolved, the use of which is obligatory when the animal urinates on the public highway “to avoid dirt and possible infections”, recalled María Dolores Ruiz.

“The animals have no conscience, it is their owners who must be responsible,” said the councillor, who regretted the “uncivic” behaviour of some people who do not pick up their dogs’ excrement in public areas. There is currently a municipal ordinance on the keeping of domestic animals which, among other things, classifies this type of action as an offence, with fines of up to 700 euros. Although there have already been some fines, with the collaboration of the local police, the councillor assures that “the intention is not to fine, but to raise awareness in society of a responsible attitude towards their care and respect for public coexistence.

The awareness campaign has been taking to the streets for months, both in parks and public places where the presence of dogs is detected, as well as in schools and other centres. The campaign informs of other issues such as the existence of the three dog parks that operate in the municipality, where it is planned to continue expanding them, said María Dolores Ruiz. What to do if a pet is found or lost or remembering the obligation of certain vaccinations or the chip, among other care, is also part of the campaign of the Department of Health.