The Local Police of San Javier has celebrated its patron saint, San Gregorio Magno, which coincides with the 11th of November, the date on which the police service was created 71 years ago in San Javier. The chief commissioner, Salvador Angosto, who today said goodbye on the occasion of his retirement, recalled with humour, that the service was created then with two guard posts with a salary of 36 euros per month and 14 payments.

The staff, who now number around 70, also said goodbye to the policeman, Juan José Barrionuevo, who is retiring after 40 years of service, and had a special recognition with the sub-inspector, Román Vidal, who is celebrating his silver jubilee as a policeman in San Javier. The chief commissioner, Salvador Angosto, who is leaving the service after 33 years, the last 11 as chief, was in charge of presenting an award to José María Carrasco, head of the local company Grúas Carrasco, “with whom we have always had an excellent relationship and collaboration”. 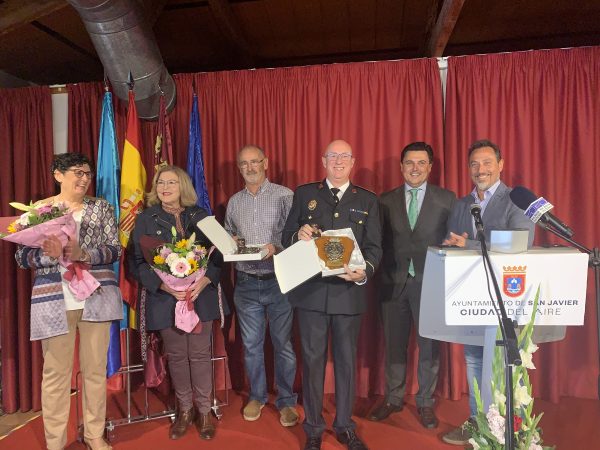 The ceremony commemorating the Patron Saint of the Local Police of San Javier, was held at the Museum of San Javier, chaired by the Mayor, José Miguel Luengo and the Councillor for Police, Rubén Pérez, with the presence of civil and military authorities, local police officers and family members and representatives of local society. “The Local Police is the service that never sleeps, the one we turn to for anything”, recalled the mayor, José Miguel Luengo, who thanked the officers for their work and announced that “we will continue to provide the Local Police with more human and material resources and infrastructure”, in reference to the new Security building that is currently being planned, “to become an exemplary service in a short time”. Luengo referred to the families of the officers, in particular Barrionuevo and Angosto, who were saying goodbye today, and thanked them for “all the hard work and effort they have put in to hand over two men who have worked so hard for all the residents of San Javier”.

The Councillor for Security, Ruben Perez claimed the celebration of the Patron “to be proud to be police and local police of San Javier, the best town in the region. The councillor said goodbye to the chief commissioner, Salvador Angosto, “who is leaving against my criteria” although he said he was happy for his family, after highlighting his professionalism, rigour and his 24-hour availability. He also praised Police Officer Barrionuevo, who was saying goodbye today on the occasion of his retirement, “for having been a model for all the staff and an example for the new officers to follow”. A mass had previously been held in honour of the Patron Saint, in the Parish Church of San Javier on a day that ended with an aperitif for all those attending, after the act of recognition, in the Museum of San Javier.