The Municipal Pavilion of Los Gallardos, in the heart of the Levante Almeriense, has hosted the celebration of the Day of the Province, the event in which the Diputación de Almería delivers its medals, the most important recognition of the Institution, to those people who through their work and talent contribute to the growth of the 103 municipalities and the smaller local entity.

In a solemn ceremony, hosted by journalist Verónica Ruiz, the president of the Provincial Council, Javier A. García, accompanied by the mayor of Los Gallardos, Francisco Reyes, and the provincial and local corporations, presented the medals of the Day of the Province, as unanimously approved at the last plenary session on 28 October: the Sports medal to ‘La Desértica’; the Social medal to the ophthalmologist Joaquín Fernández; the Culture medal, posthumously to José Guirao and the Gold medal to the journalist Carlos Herrera.

The President of the Provincial Council has highlighted the “very special” event that the province is celebrating this year with the bicentenary of the Institution and the creation of the province, and that “today we can celebrate without restrictions this event to celebrate our Almeria as a cohesive and committed land. As is the municipality of Los Gallardos, which perfectly represents the most characteristic identity traits of the entire province and the towns that make up the Levante region. An identity marked by the continuous eagerness to improve and the most sincere hospitality towards those who come from outside”.

In this sense, Javier A. García remarked that in these 200 years of history, the province of Almería has become one of the most favourable places for business projects, and has exposed data such as the leadership in strategic sectors such as agriculture, natural stone or tourism, and other indicators such as the high number of self-employed or the more than 44,500 companies that exist in Almería.

As for the Medals, the president has underlined their great contribution to Almeria society in each of the spheres to which they belong. To La Desértica for promoting sport and tourism in the province; to Joaquín Fernández for his solidarity with those who need it most; to José Guirao for the “unfathomable” legacy he has left in the world of culture and to Carlos Herrera for “vindicating your Almerian roots and transmitting in each of your programmes a passion for enjoying life”.

Finally, the president said goodbye by recalling that “today we celebrate our roots, our way of being and the Almerianism that unites us, that the Diputación de Almería will continue to ensure the prosperity of our people and equal opportunities Thank you to our 2022 medals for showing us how grateful we should be to fate for having placed our lives on the paths of such a wonderful land as Almería”.

For his part, the host mayor, Francisco Reyes, thanked the president for choosing Los Gallardos to celebrate the Day of the Province: “I am very proud that our town is the capital of the province in an exceptional way. Thank you for choosing our town president, we are a young municipality of the Levante with a strategic and privileged situation; as well as a great history and traditions that we invite you to know”.

In addition, he has highlighted the great human heritage of Los Gallardos that contributes to make people: “The gallarderos and gallarderas build Los Gallardos and are our most important treasure,” he said while recalling that the Auto Sacramental de Los Reyes Magos, an ancestral tradition, received last year the Medal of Culture in Purchena.

Examples for the whole of society. Gold Medal, Carlos Herrera 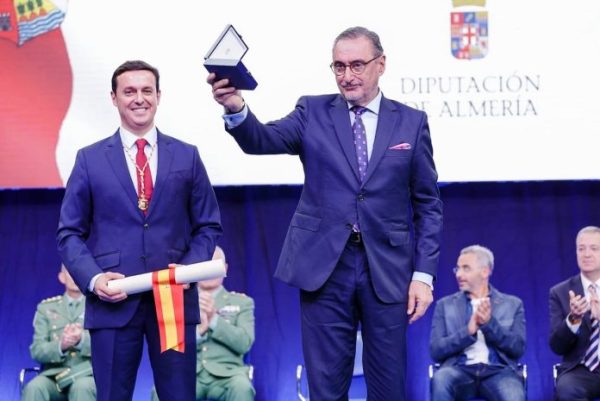 And then it was the turn of those honoured with the main distinction awarded by the Diputación de Almería, the Gold Medal. Carlos Herrera’s voice is one of the most listened to and loved in the history of Spanish radio broadcasting. Born in Cuevas del Almanzora, he has been linked to the world of communication since 1977 when he debuted on Radio Sevilla and, later, on Radio Mataró, and he has always shown his Almerianism. Since 2004 he has been a radio morning leader, first on Onda Cero, and since 2015 with his programme ‘Herrera en Cope’. His long list of awards includes five Premios Ondas.

The journalist has been grateful, moved, for this recognition that “fills me with pride and satisfaction” and has stressed that he has been able to be or live in many places, but above all he has always claimed his homeland: Almería. “To come today to Los Gallardos is a wave of experiences that come to my head and to my heart as if a cotton wool of honey were tickling my face. To return to the land is a blood bond, it is to unite me with diverse people like you who inherit the tradition of the hoe and the plastic, those who plan the future of the European granary, those who prepare a land that can only grow and multiply”, he assured before reciting a beautiful sonnet with the links that unite him to Almería.

The Medal of Culture posthumously awarded to José Guirao recognises the work of one of Spain’s most important cultural managers and art experts from the end of the 20th century until his death on 11 July 2022. Born in Pulpí, he has spent a lifetime linked to the world of culture until becoming Minister of Culture and Sport of the Spanish Government between 2018 and 2020.

The award was collected by his nephew, Andrés Soler Guirao, who said that when he received the news of the award “the institutional weight of my uncle and his vast career came to my mind, as he devoted his entire life to his vocations as a cultural manager and public servant, which has deprived us of his presence on many occasions. His most characteristic traits are his tenacity and his unwavering commitment to culture and cultural heritage, as well as to his humble origins”.

The Social Medal for Joaquín Fernández, medical director of Qvision, values his efforts to improve the visual health of thousands of people, and to bring his solidarity to initiatives that support the talent of our young people through his training scholarships. Fernández is one of the world’s most prestigious specialists in presbyopia and cataracts, and carries the name of Almería linked to solidarity all over the world through the Elena Barraquer Foundation.

On receiving the medal, Joaquín Fernández said that he was “absolutely proud” to share this award and recalled how exciting it was to receive the news from the President while he was at a congress in Mexico City. He also shared his experience as a patron of the Elena Barraquer Foundation and the four expeditions they have carried out and the more than 1,000 people who have been operated on in a week who have regained their sight, as well as the stories of people who have recovered their sight and have made their dreams come true thanks to the Qvisión scholarships that were conceived together with the President of the Provincial Council.

With only four editions, ‘La Desértica’, organised by La Legión with the support of the whole Almerian society, has become one of the most prestigious ultra-distance races in Spain, fulfilling the objective of La Legión to strengthen ties with the citizens. In its last edition, held on 22 October, La Desértica has beaten its best figures with the participation of more than 6,500 athletes. The Sports Medal was collected by General Melchor Marín Elvira, head of the King Alfonso XIII Brigade of the Legion, and Colonel Enrique Gomariz Devesa, president of the La Desértica Sports Club.

Gomariz expressed his gratitude for the recognition that they receive “with great honour” and assured that in the exciting challenge that is La Desértica “everything has aligned for it to become a reality and a success”. In this sense, he assured that “the unwavering support of the institutions, with the Provincial Council at the head, as well as the State Security Forces and Corps, together with the great welcome of the people of Almeria, which has forced us to give the best of ourselves”, has been “crucial” for the success of this event, despite its youth.

Throughout the day there were other emotional moments, such as the raising of the flag of Almeria and the unveiling of the commemorative plaque that took place in the area outside the Pavilion before the start of the ceremony. The award ceremony was enlivened by the music of the Diesis String Quintet, who played pieces by Mozart and Handel, and the Andalusian and Spanish anthems that were played at the end were performed by the Agrupación Musical Ben – Beder de Los Gallardos and Bédar.