The Department of Festivities has chosen the Dornier that adorns the courtyard of the Museum of San Javier as a symbol “to raise the flight of our patron saint festivities”, as a backdrop to present the programme of festivities in honour of the patron saint of San Javier to be held from 18 November to 11 December, on weekends and public holidays. The festivities in honour of San Francisco Javier are returning to pre-pandemic normality, and re-establishing long-established customs such as the election of queens and ladies of the fiestas and the parade of floats, among others. The mayor, José Miguel Luengo, the councillor for Festivities, Isidoro Miñano, the president of the festival committee, Ricardo Luna, presented today “a programme agreed and worked with the festive clubs of San Javier so that we can all enjoy these days,” said the mayor of Festivities, Isidoro Miñano. The presentation, which was attended by representatives of the festival committee and the author of this year’s poster, Loli Pérez, was attended by the parish priest of San Javier, Juan Prieto, who recalled the coincidence with the 400th anniversary of the canonisation of the patron saint, St Francis Xavier, and the commemorative events being held as the I Javierada del Mar Menor.

This year’s chosen town crier is Manuel Martínez, a resident of San Javier, who was councillor for Festivities for 12 years, between 1995 and 2007, who will harangue people to enjoy the fiestas from the balcony of the Town Hall, where the festive proclamation returns on the evening of Friday 18 November, to kick off a weekend of election and crowning of the youth queen on Saturday night, and the children’s queen on Sunday afternoon in the municipal marquee. The gastronomy will be represented by the traditional tasting of the giant Cierva cake and on this occasion also the typical caldero with the collaboration of the Cofradría de Pescadores. The Ruta de la Tapa, which will be active from 18th November to 5th December, offers exquisite bites in a route that every year continues to gain more and more followers in the participating bars and restaurants of San Javier. Sport could not be absent from the fiestas of San Javier either, with multiple commemorative championships and exhibitions from different schools. 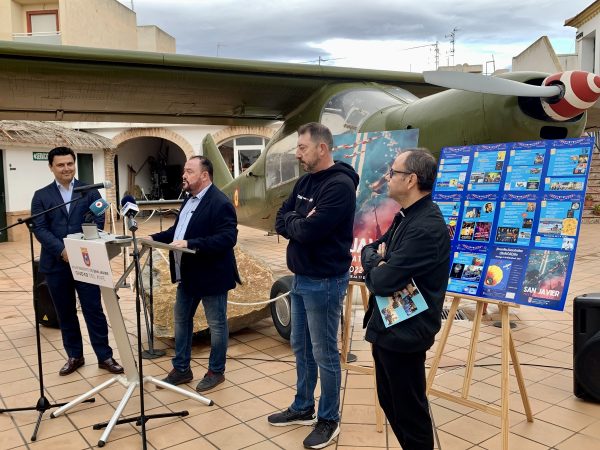 The president of the festival committee, Ricardo Luna, announced one of the novelties this year, the Winter DJ Fest, scheduled for 5 December, a charity concert organised by the festival committee and whose proceeds, with tickets priced at 5 euros, will be donated to the Único association, which cares for abandoned cats and dogs, and AFA Levante, dedicated to Alzheimer’s disease. The parish priest announced the I Javierada del Mar Menor which will be presented in a few days, and a change of itinerary in the procession on the Patron Saint’s Day, on 3 December, which he announced as a “very emotional surprise”.

The Mayor of San Javier, José Miguel Luengo thanked the work carried out by both the Department of Festivities and the festival committee to organise “a programme to which no one can be unaware and we can all find activities of our preference for their variety”. Luengo pointed out that San Javier “is committed to its traditions, to stimulate them and make them grow but always open to new ideas and initiatives that complement each other as our festivities show every year with new additions”.

Full programme in PDF (in Spanish)