Education begins extension and refurbishment work at CEIP Ferrer Guardia de la Cañada with an investment of more than 280,000 euros

The Education Delegate has visited these works, which will involve the extension of two new infant classrooms and the elimination of architectural barriers that currently exist.
The regional delegate for Education and Sport of the Junta de Andalucía in Almería, Antonio Jiménez Rosales, has visited the Ferrer Guardia Infant and Primary School in the Almeria town of La Cañada de San Urbano, where the Regional Ministry of Education and Sport, through the Andalusian Public Agency for Education, has begun extension and refurbishment work this week for an amount of 281,026.30 euros and with a completion period of six months. During the visit to the school, Jiménez was accompanied by the director of Ferrer Guardia, Sergio Montes Cruz. 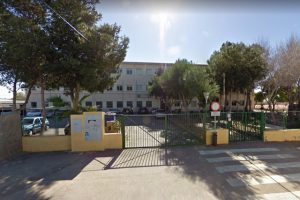 Jiménez explained that the school currently has two infant and primary school lines and capacity for 450 places, but requires two more infant classrooms, with 50 additional places, “to meet the high demand for schooling in this area”. The work will consist of the construction of these two new classrooms on the terrace located on the first floor of the building for this level of education. Likewise, the toilets for the students located on that level will be remodelled to adapt them to the new occupancy.

Another line of action at CEIP Ferrer Guardia will be the elimination of architectural barriers, with the aim of guaranteeing accessibility and mobility throughout the educational complex. To this end, a lift will be installed on the west façade of the main building and a porch will be built on the ground floor which, through its roof, will also serve as a communication walkway between the infant and primary buildings on the first floor. In addition, the current conditions of the access ramp to the infant classroom and the paving of an area of the playground will be improved, eliminating steps and barriers.

This intervention, awarded to the company Construcciones J. Lorenzo S.L., is included in the Plan de Infraestructuras Educativas de la Consejería de Educación y Deporte, which is executed through the Agencia Pública Andaluza de Educación. The contracting has been carried out through the new Framework Agreement implemented by the Agency, which allows speeding up the awarding deadlines of the actions, thus reducing the time for the start of the works.

The extension of CEIP Ferrer Guardia has European co-financing through the REACT-EU funds within the Andalusia ERDF Operational Programme 2014-2020, as part of the European Union’s response to the COVID-19 pandemic.